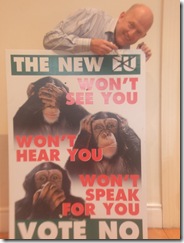 Four years ago I tried to get a few hundred chiropractors to make vexatious complaints against each other, to tie the GCC up in paperwork for years. Chiropractors thought everything would be better after the GCC elections and regulatory reform, complaints happened to the chiropractor down the road.

If the IC find there is a case to answer it has to go to a Fitness to Practice hearing. When I was on council we looked at the adversarial nature of this process and thought it would be a good idea for the committee to sit without lawyers and make a decision based on the “Papers”. If the chiropractor trusted the process it was less adversarial and would save a lot of money. The chiropractor would appear in front of the committee to hear their decision and make a case for mitigation if necessary. If chiropractors were to agree to this process in the website complaints it would please the status quo. Zeno would not have to be cross-examined 600 times, the GCC would not have to instruct a barrister for 600 complaints and the GCC would be seen to be regulating the chiropractic profession and protecting the public.

With the precedents set by previous case its easy to predict outcomes of PCC hearings, so in this case scenario the worst that could happen would be an admonishment. The statements are not in dispute so it will be relatively easy for the committee to decide which claims made on  websites constitute “Unprofessional Conduct” (UPC).

For years now the GCC has been more than happy to cause chiropractors financial hardship and stress persuing vexatious cases. This provides chiropractors with a wonderful opportunity to act as the nuisance to the GCC. The chiropractors have no insurance cover so the chiropractor has no choice but to defend themselves and their human rights have to be protected by the legal assessor during a Fitness to Practice hearing. To go this way would not cost anything because you are not using a lawyer and the worst possible outcome would be an admonishment based on previous cases.

Dana Greene would be a good person to seek advice from, she was on the committee in the Jensen case which was similar to this. Some of the comments that were on the website were on the extreme side “subluxation the silent killer” describing hysterectomies as “butchery”. The other website case which also resulted in admonishment had chiropractic curing deafness. Therefore I am confident very few of the current case will be judged as UPC, yes chiropractors were naive maybe even stupid to use the wording they used, however there is no evidence of patients being unduly influenced or harmed and I am sure very few of the complaints will result in UPC and chiropractors should have the courage of their convictions and do to the GCC what they have been doing to chiropractors for years.

The GCC will have to hire a barrister for each case. The expert opinion each chiropractor would use would be broadly similar, the only thing they would have to spend money on. There defence would go something like this; We wrote our websites based on the claims on the websites of our association the BCA and the regulator GCC and acted in good faith. Empirical evidence from our experience in practice also supported these claims. The GCC would have to have an expert report for every case and a witness and at least 2 days for every case. For 600 case they would need about 4 years and £8,000,000. This is probably why the GCC has not been presenting evidence at hearings lately, they dont have the money to prosecute complaints. Chiropractors who put a good defence together are more likely to get off by seeking a public hearing because the GCC does not have the money to  build and present a case against these chiropractors. Make no mistake a “Papers” hearing will be a deal between the BCA and the GCC to save face, with a few chiropractor bones  thrown to the skeptics to justify their efforts.

The BCA/GCC alliance has gone to great trouble keeping these chiropractors apart leaving the BCA as their only salvation, the same people who screwed up the chiropractors insurance and sued Simon Singh.

My e-mail is lanigan@ (the domain name) chiropracticlive.com

(the domain name) is not in the address I wrote it like that to avoid spam.