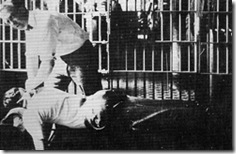 IN 2002 Margaret Coats made a complaint against BCA chiropractor Jesper Jensen. She got David Byfield then a mere tutor at WIOC to write a report on his opinion of the website. After reading my rebuttal of the Byfields report Coats decided to be more specific and focus on a number of statements that were on the website  which they stated amounted to “Unprofessional Conduct”. Presumably because the case for the defence would have focused on David Byfields embellishment of the claims rather than the actual claims. The GCC response to the mass complaint is no different to the persecution of chiropractors 100 years ago when many were arrested for practising “Medicine” without a licence.

Chiropractors who are preparing their defences should bear in mind that Section 19 (4) of the chiropractic act 1994 states that "not every breach of the code of practice necessarily constitutes unacceptable professional conduct" The question is Whether the overall conduct (by publication of the website) can fairly to be said to have fallen short of the standard required of a registered chiropractor.

If a chiropractor acted in good faith they should not be found guilty and why I am having difficulty understanding how chiropractors who had nothing what so ever to do with the website are being admonished.Guilt by association is the type of “justice” Nazis and the apartheid regimes believed in.

Most chiropractors based their websites on what their association and the GCC had on theirs and the way they were educated. That to a standard validated by the GCC,s Education Committee. If you were taught something at college and believed it to be true you could not be guilty of dishonesty, trying to mislead the public or unprofessional conduct. The BCA was not keen on members presenting this line of defence as it left them open to a class action from chiropractors or action from trading standards.

The Barrister for the GCC stated in her opening statement in the Jensen case which is important to keep in mind when defending what was on your website. "The General Chiropractic Council takes no issue with Dr Jensens desired mode of practice , or his rational for making clinical decisions regarding patient care. The issue is the “accuracy,tone content and inference from the material contained on the website". Where you got the information on the website could be a matter for trading standards to take action against the source, rather than the individual chiropractor.

The following statements were found to be “truthful” and not “misleading” by the Professional Conduct committee and should be used as a benchmark for what is acceptable for chiropractic websites to claim, based on past PCC decisions, as no other guidelines have been issued since.

The ASA had no jurisdiction over websites until March this year. The ASA gets quoted a lot, the ASA could only act against your leaflets not on websites so breaches of the ASA code is not applicable and why they have not taken action against any websites.

1)  "The birth process is potentially a traumatic, crippling event. There is mechanical stress caused by manipulation by the gynaecologist and even the application of standard orthodox procedures can be intolerable to the foetus"
2) " All children with colic should have their spine checked for the vertebral subluxation complex. It would make the difference between an unhealthy child and a healthy one.
3" ) "If you child is suffering from any of these common conditions it is essential to get his or her spine checked for vertebral subluxations, not because the doctor of chiropractic is treating your child for these conditions but because all children especially if they are ilkl need health spines …….fever, croup,poor posture,constipation"
4) "The slightest interference in the nerve supply could adversely affect the mother and developing foetus"
5) "There is no such thing as a safe drug"
6) "almost all types of drugs and medications have been linked to foetal damage or malformation"
7) "Chiropractors correct the vertebral subluxation complex a dangerous condition of your spine that….
8)  "telling a patient that since medical procedures have not worked he/she simply has to learn to live with itis the height of medical arrogance. This approach assumes that if a medical doctor cannot cure a problem it cannot be cured by anyone"
9) "Research has shown that 90% of people who had SI problems and were totally disabled had been in pain for many years, returned to normal activities of living after 2 to three weeks of chiropractic. This improvement was maintained after one year

1 comment for “It goes against natural justice for the General Chiropractic Council to set a new bench mark for what constitutes “Unprofessional Conduct” without informing registrants.”