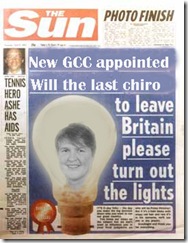 It is fair to say having a complaint made against you that alleges you are guilty of “professional incompetence” must be pretty stressful. Margaret Coats and her team of Rottweiler’s spend 18 months putting a case together. Then some months ago they would have allocated three days in September for the hearing, appointed a panel and a legal assessor to hear the case.

The chiropractor instructs a solicitor, spends months preparing his defence, takes a week of work books into a hotel in London arrives for the hearing at the GCC head office prepared to defend his professional reputation only to be told:

Dr Scott,
At the outset of the hearing the GCC informed the Committee that it would not be offering any evidence in relation to Particulars 5(b) and 6 of Allegation A and Allegation B in its entirety. The Committee therefore found those matters not proved.
At the close of the evidence from Patient A, the Committee were invited by the GCC to use
its powers under Rule 6(7) of the GCC’s Professional Conduct Committee Rules 2000 to
dismiss the outstanding Particulars of Allegation A. The Committee considered that
insufficient evidence had been adduced to satisfy it that the Allegation could be well founded
and it therefore finds the Allegation not proved.
That concludes the case. (and you can fuck off, or sentiments to that effect) signed:
Chairman of the Professional Conduct Committee http://www.gcc-uk.org/files/hearing_file/Notice_of_Finding2.pdf

No one is responsible for wasting your time, not one is responsible for taking 18 months out of your life and bring untold misery upon your family. This has been going on now for 10 years and chiropractors pay their registration fees every Christmas like the proverbial turkeys and do nothing thinking it wont happen to them and now it has happened to the majority of chiropractors they respond by keeping their heads down.

Margaret Coats will say these case come before the Professional Conduct Committee because the PCC have to sit when the Investigating Committee decide there is a case to answer. The Osteopaths do not interpret their act in this manner, the GCC interprets the act this way, because Margret Coats went and got a legal opinion which stated “case to answer” rather than seeking the legal opinion the Osteopaths got which would have enabled the IC to weed out cases like Alan Scotts and the skeptics vexatious complaints. I was the only person on council to question this legal advice, to be told this opinion was from an eminent QC, to which I remarked opinions are like noses, we all have one.

Same thing happened Nils Hallin in August the GCC made an allegation and did not have the evidence to back it up http://www.gcc-uk.org/files/hearing_file/Notice%20of%20Finding%20Hallin.pdf

not much evidence either against Jonathan Sharp earlier  in August http://www.gcc-uk.org/files/hearing_file/Notice_of_Finding_Sharp.pdf

These cases against innocent chiropractors will be rightly removed from the GCC website in a few weeks, however chiropractors looking at the proved cases on the GCC website should not forget that Margaret Coats way of bringing these cases to the IC has brought untold misery to as many inocent chiropractors and there is a better way of doing it as the osteopaths have shown.  Margaret Coats enthusiasm for bring cases to the PCC is legendary and now they are  threatening a witness’s who don’t wish to continue with her complaint against a chiropractor with a fine of £5,000.

← A true skeptic does not reserve their skepticism for alternative and complementary medicine.
I can see the headlines. Its because chiropractors are prescribing Diclofenac to the wrong people. →

3 comments for “The General Chiropractic Council is not fit for purpose, how many times do chiropractors need to be told this before they act?”