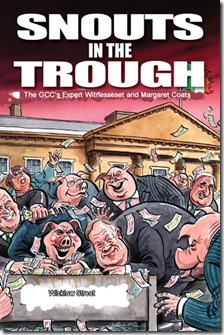 A new graduate usually starts work in August/September of the year of graduation and are expected to pay £1,250 for the full year even though they may only work two or three months of that year. Then new graduates are expected to pay another £1,000 in November for the following year. The GCC argue that they need this money to fund the regulatory process. Last week they spent about £10,000 of this money.

Nathalie Lismonde was suspended from the GCC register in 2008. She did not attend the original hearing or any of the subsequent reviews, presumably she has told the GCC she has no wish to be on the register or call herself a chiropractor.

The GCC see this as showing lack of insight into what she has done wrong and every few years they convene a PCC hearing to review their original decision. As Mrs Lismonde seems to have no interest in complying with Margaret Coats wishes, these reviews will continue indefinitely costing thousands of pounds every time the PCC meet. Good work if you can get it, beats working in MacDonalds.

On 13 January 2011 the Professional Conduct Committee of the GCC met  again to see if Mrs Lismonde had decided to acknowledge the authority of the General Chiropractic Council and reviewed to review of the Suspension Order currently in force in relation to Nathalie Lismonde. The Committee decided to extend the Suspension Order for 3 years. The Committee will again review this Order shortly before its expiry in 20014.

In January 2009 The PCC met again to see if Mrs Lismonde would acknowledge the authority of the General Chiropractic Council and reviewed the Suspension Order imposed on Ms Lismonde in May 2008. Having reviewed the Order, the Committee determined that it was necessary to extend the Order for a period of 2 years. In deciding to extend the Order the Committee took account of the fact that "Ms Lismonde has ignored the comments and advice of the Committee at the last hearing… in order to uphold confidence in the profession and its regulatory process it is necessary to extend the suspension by a substantial period. This is to reflect the concern that arises from Ms Lismonde’s apparent disregard of the regulatory process." The findings against Ms Lismonde in May 2008 related to her treating patients as a chiropractor at a time when she was registered as non-practising and was not appropriately insured.

In May 2008 The PCC found Mrs Lismonde guilty of unacceptable professional conduct. The PCC concluded that the minimum sanction necessary to protect the public was a Suspension Order for a period of 9 months. The PCC stated that "the integrity of the regulatory system for chiropractors depends on the cooperation and support of individual members of the profession, including payment of an appropriate prescribed annual registration fee to the GCC. Adequate protection of the public requires that chiropractors should have appropriate insurance in place when providing treatment to patients. Mrs Lismonde disregarded both these considerations in failing to register as a practising chiropractor and then providing treatment without having professional indemnity insurance cover. The GCC is bound to take a serious view of such conduct, particularly when it is associated with a lack of insight on the part of the chiropractor concerned."

← AECC has removed all reference to chiropractic helping children with colic, otis media and flies the flag for the orthodox approach to children’s health.
Whats the difference between confirmation bias and just being biased. →

4 comments for “Another example of how General Chiropractic Council wastes registrants money.”