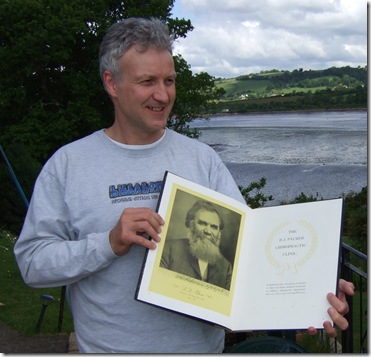 The worst thing about being thrown off the General Chiropractic Council, was the indifference shown by the chiropractic profession. Apathy is what has allowed the GCC/BCA alliance to promote their biomedical agenda for chiropractic.  In recent months I have sensed that attitudes are changing but few were prepared to put their head above the parapet. A letter I received today from Gert Van der Walt DC a BCA chiropractor who practices in SW London suggests things may be about to change.

In the picture is Steve Carpenter DC holding an original Palmer book signed by BJ Palmer during his trip to the UK  in the 20s. Steve  found the book thrown in a skip outside the AECC library in the 70s, when UK chiropractors began embracing the biomedical agenda and clearing out the old.

Hopefully Gerts letter and Steffan’s postings on this blog may be the stones that start  ripples that give a few more chiropractors the courage to stand with them in support of chiropractic which is on its knees at the moment in the UK. While many would describe me as a “loose cannon”, (a badge I wear with honour), Gert has been part of the chiropractic establishment for most of his professional career and he is not convinced by the recent proclamations of the leadership of the UK chiropractic profession.

We, the undersigned, wish to strongly express our misgivings about the future of Chiropractic, when, at the merest sniff of controversy about the validity of care or the basis of Chiropractic, our profession’s leadership, in co-operation with the GCC (General Chiropractic Council), deems it necessary to issue a knee-jerk response “in the public interest”.

This begs the question – have we been lying to our millions of patients for over a century, by claiming that the VSC (Vertebral Subluxation Complex) interferes with nerve energy transmission and thereby prevents the body from restoring itself back to health? Are we just adjusting joints to hear audible releases and patients have improved by placebo?

The Vertebral Subluxation Complex (VSC) has been the mainstay of the profession for over a century – to now suddenly relegate it to the scrap heap is playing beautifully into the hands of our protractors (externally and internally) – just look at the orchestrated programme aimed at over 600 Chiropractors who dared to claim that they have seen patients overcome conditions like back ache, headaches, leg and arm pain, amongst many others. We are again facing the challenges that lead to the Wilk et al case in the 1970’s in the USA.

The word “subluxation” is synonymous with Chiropractic – it has been accepted by:

1. Most of the major Insurance Companies worldwide

3. World Health Organisation (WHO) – “WHO guidelines on basic training and safety in Chiropractic [2005]

6. Major Chiropractic organisations who accept the ACC (Association of Chiropractic Colleges) paradigm on “subluxation” (May 23, 2001)

7. Most of the statutory bodies in countries that have legislated for Chiropractic around the world.

What has happened to all the Workmen’s Compensation facts and figures regarding the “Effectiveness and cost – effectiveness of Chiropractic care” – were we conning Governments about the VSC – you can bet your bottom dollar that all Government Departments of Health had their medical teams scrutinize all the Chiropractic submissions and we would not have impressed them with rhetorical facts and figures.

To render all research inadequate and flawed if it is not an RCT (Randomised Controlled Trial), is flawed in itself. Are case studies/series and subsequent similar studies, as well as individual practitioner’s clinical practice wrong then? With a combined practicing career of 40 years, is it wrong to assume nerve interference causes more than just pain? We all know about the complexities of the nervous system – the master controller of everything (posterior columns, spinothalamic tract, autonomic nervous system etc.), yet to say only pain is a subsequent of nerve interference is ridiculous. Without the basis of the VSC to explain these complexities and resultant dysfunctions, we are rendering ourselves inadequate. We understand with the onset of the mass GCC complaint, some Chiropractors were claiming cure for many conditions, but is it wrong to advertise one has noted improvements in patients suffering from epilepsy, asthma etc. when over 38 years of practice would suggest there is more to Chiropractic treatment than merely the relief of musculoskeletal complaints, and therefore, there should be more to spinal segmental dysfunction – viz: VSC. An interesting note is that in the recent Clinical Chiropractic Journal [1] (the official journal of the College of Chiropractors and a publication regarded as providing significant evidence-based research details), Martin Young – the editor, follows the same standpoint as us in his editorial: “Evidence-based balderdash” makes for interesting and thought-provoking reading.

Chiropractic literature is resplendent with the word “subluxation”:

4. Association of Chiropractic Colleges – “subluxation is a complex of functional and/or structural and/or pathological articular changes that compromise neural integrity and may influence organ, system function and general health”

What we find most interesting is that in 1994, the US Government’s Agency for Health Care Policy and Research released a report that found that there were, at that time, only two scientifically validated treatments for low back pain (without red flags) – that is: analgesics and manipulation / adjustment. The medical establishment and its complementary therapies was found wanting in that a large percentage of their treatments / modalities were found to have no basis in science, yet they did not rush out to change names of treatments / modalities that were not “scientific”, or ban their use – in the “public interest”. Why are our powers that be kowtowing to “public and scientific opinion” that does not give a hoot what you call something, as long as it works and helps people regain their health. Is health merely the absence of disease?

We would strongly dispute the statement that there is no scientific basis for the VSC – what happened to all the work that Scott Haldeman et al did in the 1960’s to show that mechanical interference to the nerve root at the exit foramina interferes with nerve energy transmission, to name but one study.

The BCA has advised its members not to use the word “subluxation” and that their advice has no bearing on our Scope of Practice. What was the BCA defending when it took on the Singh case if all that we have been telling our patients for a century has not been “bogus”?

We are being encouraged to follow the so – called medical model, by looking at prescription rights – for decades now we have told our patients we do not prescribe drugs and that drugs are dangerous (look at the statistics for iatrogenic disease) – yet a large percentage of our BCA membership now calls for prescribing rights at their AGM. Are we so far gone that we now want to become pseudomedics?. What about the WFC Policy Statement (April 30, 2003) that “Chiropractic does not subscribe to the prescription of drugs in the interests of Chiropractic principle and patient welfare”? As a matter of interest, the BCA has been selling, as part of their marketing, postcards of a vial of painkillers with the phrase: “Avoid painkillers – Dosage: Visit your Chiropractor regularly” [2]. If the BCA is for prescription rights, why are the advertising materials they sell telling a different story? Following the Singh case, we as a profession were asked / instructed to remove a number of “unscientific” disorders from our websites – yet the word “whiplash” (a term said to be removed from all marketing materials by the ASA and subsequently GCC), appears on the AECC website [3] – the amount of discrepancies and double standards within the profession are staggering and bringing the profession into disrepute!

We as a profession need to stand up and be counted for providing natural healthcare care that helps the body to restore itself to health (without the use of drugs or surgery). Without the VSC as a basis for explaining what we are doing for patients, what do we really do?.

We believe that what is at issue really, is that some Chiropractors have been claiming cure –alls and that, instead of taking them to task, the leadership is burying it’s head in the sand and playing handsomely into the hands of people who would love to see our profession destroy itself from the inside. It is also interesting to note that the BCA leadership, on their own volition, decided they could speak on behalf of all their entire membership without any consultation whatsoever.

I am quite frankly appalled at the apparent direction being taken by the leadership of the profession in the UK. Did I spend half my professional career fighting for something that, according to our leadership, never existed?.

← Quote of the week by Richard Brown President of the British Chiropractic Association.
According to General Chiropractic Council we could treat sciatica, asthma and infant colic, between October 2003 and March 2010 →