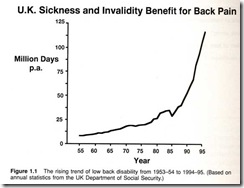 NATION IS BENDING OVER BACKWARDS AT WORK The British Chiropractic Association (BCA) reveals the top five back breaking professions
October 16th is World Spine Day
Forget manual labour, office work has been named the top back breaking profession by the BCA.
Research conducted amongst BCA Chiropractors overwhelmingly found that sedentary PC posture is likely to be causing more back problems than excessive lifting and carrying. The poll was conducted to coincide with World Spine Day, on Monday 16th October 2006.
Those most at risk from back pain are:
1) Office Worker – Long periods of time sitting in awkward positions, often slouched over computer keyboards, or maybe sitting at chairs not properly adjusted for their needs.
2) Nurse – Long shifts, often on their feet all day as well as lifting and carrying.
3) Driver – Hours a day spent at the wheel, sitting in a poor position, along with limited movement.
4) Labourer – Repeated strain from lifting heavy weights and often twisting in awkward positions.
5) Teacher & Nursery Staff – Continuously bending down to a child’s height and lifting children can cause back problems
56% of BCA chiropractors involved in the survey highlighted that those who work in an office were more vulnerable to becoming victims of back pain.
Tim Hutchful from the BCA comments: “This survey has highlighted what we chiropractors have known for some time. Lack of exercise and sedentary lifestyle is taking its toll. It is assumed that those most at risk from back pain are the ones who have very physical jobs however, as this research has unveiled, whilst lifting and carrying are still common triggers for back pain, it is those with less physically demanding jobs and who are often seated for the majority of the day that could be most prone to back problems.”
For many who work in an office environment, it is the day to day, mundane routines that are at the root of most back problems. Hunching over computer keyboards and cradling the phone between the ear and shoulder can all contribute to lower back and neck stiffness, not to mention the fact that many office workers sit for hours at a time with very little movement.
In fact, recent consumer research carried out by the BCA revealed that 59% of the working population sits down all day at work and nearly 50% of those who work refuse to leave their desks: even for lunch! It is not surprising that come the weekend, it is the office workers waiting in Chiropractors clinics.
Tim continues, “World Spine Day is an international day aimed at raising awareness of the importance of making sure we all take care of our backs. Our lives are increasingly busy, but we need to make time for our health.”
World Spine day is part of the Bone and Joint Decade (BJD) Action Week. The Bone and Joint Decade is an international multi-disciplinary initiative to improve the health-related quality of life for people with musculoskeletal conditions and will be active between 2000 and 2010. The BCA is a participating organisation of BJD; sharing BJD’s objectives to raise understanding, awareness and cooperation in tackling the problems of musculoskeletal conditions including back pain.
According to the BCA a third of the population is suffering from back pain at any one time, causing thousands of people distress and discomfort. The good news is that it is avoidable.

11 comments for “Sedentary posture and back pain”