Its generally accepted that chiropractic helps back pain, researchers have methods to measure pain and observe changes during a course of treatment. Measuring performance is much more subjective  and as researchers try to avoid too many variables they tend to avoid sports performance. In the 80s I spent time observing pre season at the New York Joints and San Francisco 49ers. I knew of chiropractic as a treatment for back pain but never considered it as a way for optimising performance until I met 49ers running back Roger Craig and Joe Montana who were using training hydraulic resistance  equipment that I was distributing in Europe. They explained the stresses that American football put on their spine and how they maintained wellbeing using Hydra Fitness machines and chiropractic. 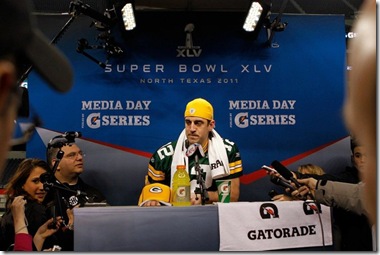 Aaron Rodgers the MVP of Sunday nights Superbowl is the son of a chiropractor, not that proves anything however you would have to wonder if chiropractic was a dangerous as people make out why do the clubs allow their stars to be adjusted by chiropractors, but dont allow their players to even go sking.

In Europe chiropractic is still a poor relation to the medical doctors and surgeons when it comes to sports medicine, except at AC Milan where its a chiropractor who runs their sports medicine programme. I have no doubt as chiropractors gain more experience and become better at communicating with elite athletes this will change. England play Denmark this week and sitting on the Danish bench will be Johannes Breum a chiropractor and graduate of AECC.

“The team wasn’t just riders. It was the mechanics, masseurs, chefs, soigneurs, and doctors. But the most important man on the team may have been the chiropractor.” – Lance Artmstrong, 7 time Tour de France Champion

“ …as long as I see the chiropractor, I feel like I’m one step ahead of the game.” – Tom Brady, New England Patriots ~ 3 time Superbowl Champion and 2 time Superbowl MVP


“Those are the guys that put me on the field when I didn’t think I had a chance to be on the field. These are professionals.” – Terrell Owens, NFL Wide Receiver

“I believe in chiropractic, and I know it works. You probably know about my long and successful career in football. I’m flattered by the testimonials to my durability. Football is a very rough and vigorous sport. Chiropractic was the key to keeping me in the game.” – Jerry Rice, Wide Receiver ~ 3 time Superbowl Champion and Superbowl MVP

“..lifting weights and seeing a chiropractor on a regular basis has made me a better golfer. I’ve been going to chiropractors for as long as I can remember. It’s as important to my training as practicing my swing.” – Tiger Woods ~ 14 time PGA Championship Golfer

“Without chiropractic, I wouldn’t be able to play consistently throughout the season.” – Johnny Damon, MLB Center Fielder and two time World Series Champion.

“You obviously can’t compete at your fullest if you’re not in alignment. And your body can’t heal if your back is not in alignment. Every track and field athlete that I have ever met has seen a chiropractor at one time or another. In track and field, it is absolutely essential. Chiropractic care is one of the things I think that no one has denied or refuted”
– Dan O’Brian, Olympic Gold Medallist ~ Decathlon

← Chiropractic vs. Medicine for Acute LBP: No Contest. What a surprise.
Courses in prescribing for chiropractors? Is this the way to boil chiropractic frogs? →