How weird is that, I had just posted the blog post announcing I was passing chiropracticlive over to others and I get the message that Coats has retired, has she gone on gardening leave as her interim replacement has been announced? I bet they dont lock her office and ban her from the paper shredder.

I get no pleasure gloating over the departure of an elderly woman who should never have had the job in the first place. Dixon, Cunliffe et al will be hoping hoping this announcement will take the heat off them and everything will be hunky dory. That’s for others to decide, Dixon and his accomplices are every bit as responsible for what happened to the UK chiropractic profession as Margaret Coats is, they are and will always remain an embarrassment to decent chiropractors with integrity. 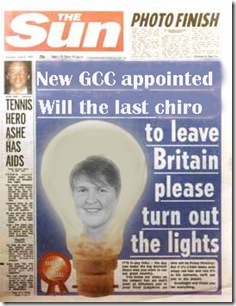 The General Chiropractic Council (GCC) have today announced that their Chief Executive & Registrar, Margaret Coats will retire on 17 June 2011.

Mrs Coats has been Chief Executive & Registrar of the GCC since its inception in 1999 and has provided dedicated service to the statutory regulation of the profession of chiropractic.  Peter Dixon, Chair of the GCC, paid tribute to her pivotal role in establishing the organisation, managing the executive functions for over a decade, and for overseeing the implementation of important milestones in the profession’s development such as the consultations on the Code of Practice and Standard of Proficiency, and Continuing Professional Development.

‘Margaret has worked tirelessly for the GCC and without her unique blend of knowledge, experience and organisational skills, coupled with her commitment to the public interest, we would not have been able to achieve as much as we have in such a short period’ he said.

The GCC are also pleased to announce that Satjit Singh, formerly with the General Optical Council, has been appointed Interim Chief Executive & Registrar.

← Why should anyone believe what Professor Edzard Ernst says, after he put his name to a BBC programme, he now describes as “deception”.
Amit Patel’s Freedom of Information request to the CHRE. →