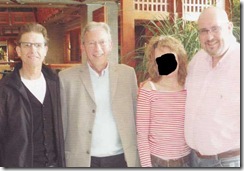 David Byfield and I have never liked each other since he altered evidence against a BCA colleague for a GCC hearing in 2002. Thats him in in his grim reaper outfit with BCA president Richard Brown (well fed on GCC expenses) and former president Tony Metcalfe (butter would not melt in his mouth).

I never found out why Professor Kliger wanted Byfield out, of AECC in 1990 and would appreciate an information on this. Nevertheless a few years later like all good committee men he showed up at the University of Glamorgam and was appointed a senior tutor and fast tracked to head and is a member of the GCC’s education committee. No wonder education standards are falling.

According to the latest issue of Clinical Chiropractic Davids will be telling chiropractors gathered in London for the ECU conference that; “The chiropractic profession is facing a number of professional issues that may threaten its future progression”, and “the situation is not being ameliorated by the fact that the profession is still viewed by many as somewhere between mainstream establishment and complementary and/or alternative (CAM) practice, a sort of “no man’s land”, despite achieving many mainstream characteristics such as statutory legislation and publicly funded educational programmes.

He states “conflicting views have arisen between the public, the healthcare community and the chiropractic profession, which may have contributed to this current lack of identity and confused image. He then goes onto say “The chiropractic profession doesn’t do itself any favours, particularly when it chooses to disregard the impact associated with perpetuating outdated principles conceived in the 19th century, and the influence this has on its current professional standing” In writing this it would have been fair to reference Simon Singhs Guardian article he adds: “Embracing modern health science would be one crucial way forward to shift public opinion and our status in the health care community”. 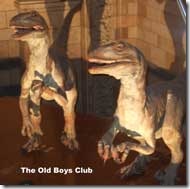 Byfield is assuming that the majority of the profession agrees with him and “the next decade will determine whether or not the chiropractic profession will be granted mainstream status and fully integrated into all healthcare systems or, to the contrary, continue to be labelled as a CAM profession with the inherent stigma and prolonged skepticism attached to this label and those who practise under this banner”. I thought CAM was positive outside skeptic circles, Byfield must have heard different.

He says that “since 2002 the chiropractic profession has accomplished a great deal, but is a long way away from realising full integration in national healthcare systems and accepting responsibility associated with mainstream status” ( The only thing that I can think of that happened in 2002 was his expert report for the GCC was discredited discredited for the “mistakes” he made.

Byfield then asks “Can the chiropractic profession overcome its problematic past to become an established and respectable mainstream profession within the foreseeable future?” This is a very complex question and it has been suggested that, in order for the profession to turn this around, succeed and overcome an unstable market share, poor social image, lack of public confidence and low status among other health professions, it must consider making appropriate and immediate changes as part of a clear forward thinking strategy similar to those adopted by the podiatric profession in the United States”

Funny that, I  get many patients who confuse chiropractic with chiropody.

Byfield then goes on to to use this this new buzz word that has creped in to the chiropractic lexicon: CULTURAL AUTHORITY we need to establish this “authority” as non-surgical, musculoskeletal spine specialists, providing a model of care that is supported by a substantial evidence base, coherent with and benchmarked against national health system governance and clinical care pathways”. Surely he must have forgot the “No drugs” bit.

Stating the bleeding obvious Byfield states “if chiropractors want to be a part of mainstream health care, they cannot be all things to all people and promulgate outdated and untested clinical principles and expect to be taken seriously by an informed society”. In other words chiropractors can not cure cancer ( does any idiot think that)and chiropractors should start working in the physiotherapists wing of the hospital and work themselves up the ladder.

He says the profession “must make critical choices and unified decisions about its identity and where it wants to fit into the milieu of health care. This may necessitate narrowing the system(s) we treat” This suggests back pain is a disease and can be treated, I have always argued chiropractic is not a treatment for anything, we maintain spinal joint function and I am happy with the way the World Federation of Chiropractic defined chiropractic a few years ago and I am sure thats a brand most chiropractors could gather around. Byfield et al want to medicalise the profession just as Osteopaths are in the US.

These points were raised by another speaker at the ECU Ricardo Fujikawa DC MD, who spoke about the medicalisation of chiropractic he gave the example of the osteopaths in the US;

Osteopathic physicians are allowed to enter residencies in most medical and surgical specialties such as Surgery, Ophthalmology and Otolaryngology, Head and Neck Surgery and Anesthesiology; specialties that offer limited opportunities for OMT. Therefore, the curriculum is constructed in a way to facilitate the practice of allopathic medicine to the detriment of developing competency in OMT. By contrast, the osteopathic profession in Europe and Latin America is much more established as a physical therapy profession and OMT plays a larger role in the daily practice. This part of the profession, outside the US, receives more allopathic criticism.

This is what concerns Byfield and he would like all chiropractors to embrace vaccination even though the majority of UK chiropractors have embraced vaccination he does not want any flies in that ointment he is preparing for the treatment of back pain.

Byfield wants the chiropractic profession  “to demonstrate that it has the capability of re-defining itself as a responsible and modern profession underpinned by contemporary healthcare values and science”. The solution as he sees it is to strive towards a more integrated role in educational delivery.

He offers us the integrated model he has developed at the University of Glamorgan based on the Danish model in Odense. Not surprisingly chiropractors start thinking they can cure disease we he has pioneered a pilot student placement programme in two local hospital trusts near the university Glamorgan. Byfield sates “Modern health care delivery is integrated, patient focused and multidisciplinary in nature” (this is an aspiration of politicians, the reality is very different). Byfield believes it is imperative that chiropractic undergraduate education expands and develops sustainable inter-professional links within the wider healthcare community to prepare graduates for this integrated care delivery model”. Thats what they thought at AECC  20 years ago, write good GP letters at the GPs will refer all their patients; this is not true and I would be very interested in surveying the graduats from Glamorgan many who have difficulty explaining the difference between a physiotherapist who provides spinal manipulation and a chiropractor because in Byfields view there is no difference.

Byfield believes such  collaboration “would be to broaden student experience, enrich the undergraduate programme and interact directly with mainstream healthcare professionals as part of the healthcare team. This development will require graduates to demonstrate proficiency in a new knowledge base and clinical and communication skills. There is no doubt this will pose a significant challenge for most chiropractic undergraduate institutions, as there are very few models where the infrastructure and links are sufficiently well developed to be fully integrated with other health professional or medical training. Curricula would require re-organisation and planning to accommodate this element of training”.

In other words Glamorgan and the GCC have got it right everyone else is wrong and Byfield goes on to explain why; “historically, chiropractic education has developed in isolation from the rest of the healthcare delivery system. As a consequence, any collaborative relationships tended to be developed locally and poorly coordinated. In order to cultivate this type of inter-professional education, the chiropractic profession must establish and adopt a modern professional identity that is reflected in the educational outcome. Secondly, the profession must determine its role and identity in the healthcare delivery system compatible with current health care evidence based philosophy.

Byfield concludes his talk by saying there is an enormous opportunity for the profession to become valued, non-surgical spinal care specialists offering expertise in diagnosis, treatment and patient management in order to gain any sense of acceptance within the wider healthcare community. This would have to be a long term strategy and the profession would have to be united in this endeavour. The future has to be led by the sensible majority, who want to integrate their services to best serve their patients and the public to secure a prosperous future.

There you have tweddle dee’s talk.

On Monday I shall look at tweddle dimmer’s contribution to the conference, explaining why statutory regulation has been “ a cracking success” . I know you could not make it up what planet do these people live on.

8 comments for “Highlights of this weeks ECU conference in London: David Byfield – how to make friends and influence Simon Singh”