Unfortunately chiropractic like medical undergraduates have little discussion concerning the philosophy of health and yet it is an essential part of the way in which we understand the world. This omission from chiropractic education may explain why the extreme wings off the profession are guided by dogma and the evangelical teachings of their chiropractic leaders.

How many chiropractic colleges embrace the educational principals of education psychologist Jean Piaget.
“ The principal goal of education is to create people who are capable of doing new things, not simply of repeating what other generations have done – people who are creative, inventive, and discoverers. The second goal is to form a mindset which can be critical, can verify, and not accept everything that is offered”

For one hundred years chiropractors fought to protect its unique identity. The enemy is no longer a zealous American Medical Association or even critics like Professor Edzard Earnst, merely an obstacle chiropractic academics can not overcome. The enemy are those among our own ranks who want to force all chiropractors to take the path they are on. They pontificate about “unity” when the mean forcing non believers to follow their dogma, rather than respect the diversity that is chiropractic linked by the recognition that there is a relationship between the structure of the spine the function of the nervous system and wellbeing. A theoretical model of vertebral motion segment dysfunction, that incorporates the complex interactions (homeostasis / innate), of pathologic changes in nerve, muscle, ligamentous vascular and connective tissues that affects adaptability to physical, chemical and emotional stresses and compromises general wellbeing. Adapted from Meredil Gaterman 2006 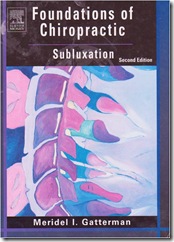 Gaterman has published in 2006 the most authoritive book on chiropractic theory setting the tone early on by stating “When it comes to communicating the language of "vertebral subluxation theory" chiropractors struggle  Adopting the approach of Humpty Dumpty in Lewis Carrols Through the Looking Glass “…..when I use a word, Humpty Dumpty said in a rather scornful tone, “it means what I chose it to mean- neither more or less….” One of the greatest challenges facing the chiropractic profession today is simply to learn to communicate with each other , our clients, and other profession.

A classic example of this has just been published on the GCC website,under ”Frequently asked Questions”

What is subluxation and is it dangerous?
A. As used by chiropractors, the term ‘subluxation’ doesn’t mean something that poses any danger to you. A subluxation is simply the name given to a joint that does not function and/or move as well as it can. Alternatively, a chiropractor may say a joint is misaligned. This may influence the way the body functions.

They only people who would describe a “subluxation” in those terms are chiropractors who do not use the term and believe a subluxation is the same as a fixation. It is no longer tenable to look at joint restriction merely from a mechanical perspective. I will never forget when the BCA rejected the ACC parading and BCA president Mike Barber stated it was because there was no mention of fixation only subluxation; “there is not always neurological involvement in the chiropractic lesion?? I pointed out to him, only fixations in cadavers are without neurological involvement. There is no neurological involvement when people are dead, unfortunately the BCA has many of these people who were trained in the dark ages speaking for the chiropractic profession

Makes you wonder how the GCC came up with this definition?