Chiropractic has a rich history of activists who were prepared to go to jail for the chiropractic profession.When the iron doors of the Scott County Jail shut on D.D. Palmer in the spring of 1906 he was destined to be the first of hundreds of chiropractors who would “go to jail for chiropractic” through most of three quarters of the century.  Herbert Ross Reaver was jailed 13 times which was the most.

He states”A sizeable portion of my life was spent behind prison walls because I practiced chiropractic,” he said. “What was it like, you ask? We were hounded. We were treated like criminals. We were subjected to harassment, treachery, and trickery. Words come to me kind of slowly, but you ask what was it like? We were always being

spied upon and arrested, tried and jailed.”

The irony is that as the GCC medicalises chiropractic, principled chiropractors like Herbert Ross Reaver will resign from Margaret Coats register. Chiropractic is not a treatment for any condition although the GCC wants registered chiropractors to be “Doctors of musculoskeletal  pain syndromes” thats physiotherapy not chiropractic, that service is available on the NHS.

I provide spinal care and help people get off pain medication, Fifteen years in practise never hurt anyone, I wonder how many people have died because they took NSAIDS all their life instead of visiting my clinic.

My marketing is based on satisfied customers they tell their friends about me and return when they need a spinal adjustment.

I have a masters in Health Promotion, I have many medical doctors as patients one wrote an article about it, they know I have resigned from the register. I DONT want to have anything to do with the GCC yet they harass me. Because even though they don’t approve of certain chiropractic approaches they need registration fees, so they put up with subluxation chiropractors and harass chiropractors who leave the register until they come back with their fees.

I was a council member at the time they went after Graham Roberts and sent the following e-mail to Margaret Coats the GCC chief executive  and Peter Dixon the chair of the GCC.

I attended the UCA conference this weekend and was introduced to Graham Roberts.

Graham came off the Register because he had not completed his CPD, not because of any antagonism towards the GCC. He was considering coming back on the register. I dont believe Graham is a criminal and I don’t thing there is any purpose served by having this man prosecuted.

Coats response was typical of her lack of compassion.

As a matter of urgency, I would be grateful if you will provide me with a detailed note setting out your best recollection of any conversation on this matter between you and Graham Roberts.  As you are aware, the police investigation is ongoing.

It is GCC policy that all offences under section 32(1) of the Act are reported to the police.

This has happened to many other former chiropractors who the GCC want on the register filling the expenses trough they all have their snouts in.

Compare this  to their attitude to medical doctor   Mr AP Kurukgy who was advertising in the yellow pages and told a patient of mine he was a chiropractor and would treat him with Laser therapy for back pain. (Which according to NICE guidelines is not as effective as spinal manipulation)

The patient (Mr X) rang me asking if this treatment was chiropractic, I told him it was not and the doctor was not a chiropractor. Mr X returned to the doctor  got his money back and complained to the GCC. The GCC did not respond for three months.

And only after I started asking questions and writing a number of e-mails. GCC employee Winnie Walsh refused to provide me with any information on the progress of their investigation fortunately the patient kept asking. No doubt the complaint would have been brushed under the carpet with all the other complaints the GCC management (Peter Dixon and Margaret Coats) would rather not have investigated independently,  Greg Prices internet activity and failure to pass some cases on to the GCC’s Investigating Committee, Maxine Whites Resignation, my removal from council, intimidation of council members 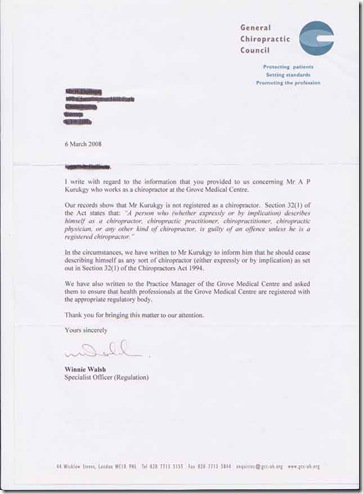 One can only wonder why Coats did not send police down to Dr Kurukgy’s office.Perhaps because he was a medical doctor, the GCC approves of them has one on council who always supports Dixon and Coats. The GCC  require an MDs letter (even though you may not have been to an MD for 20 years as in my case) to testifying your fitness to practise chiropractic in the UK.

I presented a letter from my registered chiropractor when I first went on the register which Coats refused to accept. I had to go to a GP who did not know me from Adam before I could join the chiropractic register. Sceptics are not the chiropractic professions problem they are much closer to home.

← Margaret Coats may have chiropractors attending the ECU conference in London arrested
Chiropractors are like turkeys paying for Christmas. →