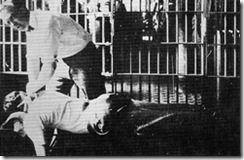 “The  joint statement “Working Together” http://www.gcc-uk.org/files/page_file/WorkingTogether_FINAL_16July10.pdf is rather amusing considering all that has happened in recent years. How many statements do chiropractors need before the penny drops, the GCC is not fit for purpose. The statement explains “the roles of the General Chiropractic Council,the chiropractic professional associations and the College of Chiropractors. My favourite bit is at the end “Openness and Tranparency:

They obviously understand what it means to be open and transparent and tick all the boxes on their website; http://www.gcc-uk.org/page.cfm?page_id=17&fc=1&hi=data%20protection#hi .What they do is what is important not what they say;

This is my complaint, which I sent to the organisation rather than any one individual:

1. That it took the GCC over twelve months to comply with my request to access my personal information as they are required to by the Data Protection Act and then it was only after the GCC was ordered to do so by the Information Commissioners Office.

2. That the GCC chief executive Margaret Coats instructed Private investigators to put me under surveillance for a breach of section 32 of the Chiropractic Act, even though no complaint had been received by the GCC. The GCC was trying to solicit a complaint and manufacture evidence about me.

4. That my telephone conversations were recorded by investigators on behalf of the GCC in an effort to trick me into saying I was a chiropractor. (Appointments were made by the investigators and not cancelled). Public bodies who tape conversations are required to inform people that they are doing it

5. That the GCC claimed in a FOI request in 23 of February that they use the Guidelines of the Regulation of Investigatory Powers Act 2000 when instructing Private Investigators. However the Investigatory Powers Tribunal who I complained to first, informs me that the GCC does not have powers under RIBA and therefore the Tribunal could not investigate my complaint. In which case it makes me suspect the actions of the GCC against me and the 17 people that it put under surveillance between 2006 and 2009 was illegal.

I would like a letter of acknowledgement of my complaint.

CC: Department of Health; The CHRE; The Privy Council; and Dominic Raab MP

PS as of today the GCC have not acknowledged my complaint which was send by recorded delivery on August 16, I have written informing them to acknowledge receipt by next week or I will ask my MP to ask for me.

The thing is Coats is still harassing ordinary members of the public, she cant help herself and gets away with it because the council has failed to hold her to account.

← I can see the headlines. Its because chiropractors are prescribing Diclofenac to the wrong people.
Did BCA finally find its spine and tell the General Chiropractic Council, its not fit for purpose? →