“In matters of style, swim with the current; in matters of principle, stand like a rock”. 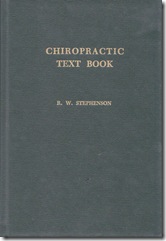 When R.W. Stephenson’s compiled his list of “chiropractic principles” in his“Chiropractic Textbook”, BJ Palmer praised him for compiling the principles of “my writings into systematic organised manner so anyone could easily find “what chiropractic is, Is not; What it Does and does not; how and why it does what it does” The number 33 should become the image we associate with our fight against the medicalisation of chiropractic, the way the iconic image of Che Guevara has become synonymous with the fight against social injustice.

These principles were described by Stephenson in 1927 for a philosophical text book, as a basis for discussion among chiropractors and students from where chiropractic would evolve from. It may even be more appropriate to use the term concepts because they are there to guide us on a philosophical journey in the pursuit of wisdom and the rock that we will stand beside. The principles are there to be questioned and discussed, as BJ did in his subsequent writings up to his death in 1961.

The principles should not be viewed as the chiropractors “commandments” as modernist chiropractors would have us believe, “out dated tenets” the “dogma” subluxation chiropractors subscribe to. Modernists deliberately interpret the principles literally without reference to the time they were written in or the language of that time.

The best example is the way medipractors ignore the hyphen in dis-ease (Principle 30 “The Causes of Dis-ease”). Stephenson clearly states in the book “Disease” is a term “used by physicians for sickness. To them it is an entity and is worthy of a name hence diagnosis”.

Stephenson describes Dis-ease as “a chiropractic term meaning not having ease. It is a lack of entity It is a condition of matter when it does not have property of ease. Dis-ease is the condition of tissue cells when there is uncoordination”. Stephenson goes onto say, “if tissue cells are not coordinating some tissue cells will be made unsound, therefore they are sick and not at ease. By deconstructing chiropractic down to a vitalist level of cell communication we are going beyond nerve interference and into the realms of neuroscience that Candice Perth would describe as the “molecules of emotion” 80 years later. Anyone who would state “subluxation chiropractors” claim to cure all “disease” is either disingenuous or ignorant.

In doing my research for this article, I stumbled across an article by chiropractor philosopher David P Koch. He has put the principles into a contemporary context far better than anything I could do and rather try and reinvent his wheel as chiropractors are prone to do, I will re present his interpretation of the principles. Koch believes the principles should illuminate chiropractic, and be used in the language of our time, with the contemporary relevance to these concepts as they were laid down 75years ago in the language of that time.

Koch then placeed the Principles in what would be vied as a more logical order in 2009. Koch states that one of the challenges of teaching these principles is that, although they clearly suggest a deductive argument, Stephenson did not necessarily arrange them in rigorous order, therefore Koch has reordered them in an attempt to relate premises to conclusions in the clearest fashion possible. The original position of the principle is in brackets.

Koch also edited the language in which the concepts are worded, both to clarify some of the relationships between the concepts and to update them in light of more current physical, biological and chiropractic knowledge.

1. The Major Premise. There is a universal intelligence in all matter, continuously giving to it all its properties and actions, thus maintaining it in existence, and giving this intelligence its expression. (1)

2. Cause and Effect. Every effect has a cause and every cause has effects. (17)

3. The Principle of Time. All processes require time. (6)

4. No Organization Without the Effort of Force. Matter can have no organization without the application of force by intelligence. (15)

5. Universal Expression. Force is manifested as organization in matter; all matter has organization, therefore there is universal intelligence expressed in all matter. (14)

6. The Triune of Organization. Any organized structure is a triunity having three necessary factors, namely intelligence, matter and the force which unites them. (4)

7. The Amount of Intelligence in Matter. The amount of intelligence for any given amount of matter is 100%, and is always proportional to its requirements. (7)

10. The Function of Force. The function of force is to unite intelligence and matter. (10)

11. The Function of Matter. The function of matter is to express force. (13)

12. The Character of Universal Forces. The forces of universal intelligence are manifested as physical laws, are unswerving and unadapted, and have no solicitude for the structures in which they work. (11)

15. Organic Matter. The material of the body of a living thing is organized matter. (19)

18. The Triune of Life. Life is necessarily the union of this intelligence and the matter of a living thing, brought about by the creation of specific internal (innate) forces. (3)

19. Evidence of Life. The signs of life (assimilation, elimination, growth, reproduction, adaptability) are evidence of the innate intelligence of life. (18)

20. The Mission of Innate Intelligence. The mission of the body’s innate intelligence is to maintain the material of the body of a living thing in active organization. (21)

22. The Amount of Innate Intelligence. There is 100% of innate intelligence in every living thing, the requisite amount, proportional to its organization. (22)

23. The Function of Innate Intelligence. The function of the body’s innate intelligence is to adapt universal forces and matter for use in the body, so that all parts of the body will have coordinated action for mutual benefit. (23)

24. The Principle of Coordination. Coordination is the principle of harmonious interaction among all the parts of an organism, in fulfilling their functions and purposes. (32)

25. The Limits of Adaptation. The body’s innate intelligence adapts forces and matter for the body’s use as long as it can do so without breaking a universal law; in other words, its expression is limited by the limitations of matter and time. (24)

27. The Character of Innate Forces. The forces the body’s innate intelligence creates are never intended to injure or destroy the living thing in which they work. (25)

28. Comparison of Universal and Innate Forces. In order to carry on the universal cycle of life, universal forces are destructive, unless they can be adapted, whereas innate forces are always constructive, as regards a specific living thing. (26)

30. The Causes of Dis-ease. Interference with the transmission of innate forces causes incoordination, or “dis-ease.” (30)

31. The Conductors of Innate Forces. Some of the forces the body’s innate intelligence creates operate through or over the nerve system in animal bodies. (28)

33. Subluxations. Interference with transmission in the body is often directly or indirectly due to subluxations in the spinal column. (31)

These concepts are the framework that should bring all stakeholders in the chiropractic profession into a more consistent moral framework, more conductive to cooperative behaviour and mutual respect as opposed to the separate moral frameworks in which separate chiropractic discipline are seeking to gain the moral high ground.

Therefore a mechanist whose vision is limited to the treatment of back pain and fixation should not be seen as unprincipled, rather limited in vision beyond the mechanical component of subluxation. This may be due to insecurity about their chosen profession and a desire to conform to the biomedical model of health, a lack of courage does not automatically make some one unprincipled.

As the author of over 70 books, numerous booklets, speeches, research, and various printed material on the science of Chiropractic, Palmer’s writings are filled with a unique philosophy of human nature related to a healing profession that matches no other. Most of B.J.’s philosophy is straight forward, simplistic, extremely educational, and remains timelessly adaptable to many past and present day situations

BJ Palmer described the fundamental Basis of Chiropractic as the; “restoration of currents by adjusting spinal buttons and opening windows, which is entirely different from the “sciences “of medicine or osteopathy. No medical or osteopathic examining board have a knowledge of the art, science, or philosophy of Chiropractic, therefore if we did apply to the medical or osteopathic boards for a state examination in Chiropractic, they could not give it. They cannot examine things they do not know, and to state that they could or would be greedish and ghoulish bigotry”

Those of you who were at the October 2008 UCA conference will have heard The GCC chairman Peter Dixons taking a similar view when outlining why it was important for the chiropractic profession to have statutory self regulation. Peter told his audience to great applause that he had spent 25 years fighting for chiropractic and “he did not want to be regulated by physiotherapists on another non chiropractic council”

I wonder what BJ would have made of the GCC committee setting the standards for chiropractic education for the next five years. Those who have been chosen to protect the leagacy he asked us to “care for”. The education commitee is chaired by this physiotherapist and supported by the MD, David Byfield and Alan Breene chiropractors in name if line with Palmers intention. The only barrier left to them redefining chiropractic is Christina Cunliffe, and I would have to ask is she there to protect the interest of traditional chiropractic or is she protecting her own little piece of turf and a female version of the BCAs old boys club. Only time will tell.

32 comments for “The UCA asked me to write this for their rebranded Newsletter. Unfortunately they redacted the last few paragraphs. “Dont want to upset the GCC.””