On Thursday I received many e-mails notifying me of the joint statement from the four associations expressing “the entire professions lack of confidence in its regulation”. 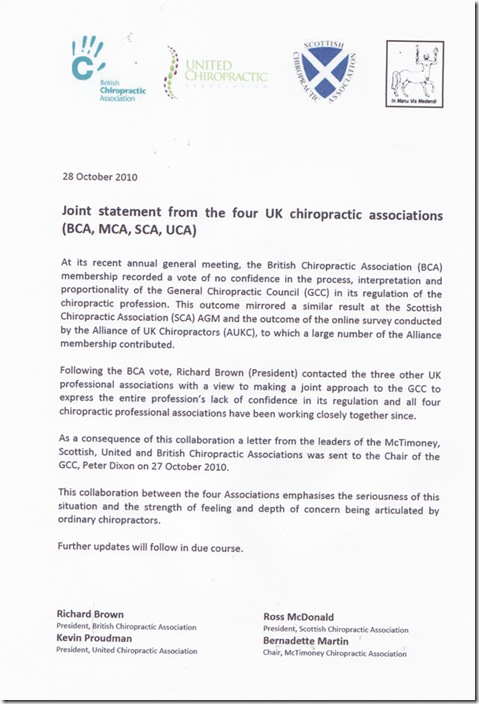 I am absolutely delighted the associations have made this statement.  Which confirms the findings of the 2005 survey which found 77% of the profession had no confidence in the GCC. Peter Dixon claimed this survey was “questionable” but never put it to the test and when I put the findings in my election manifesto the returning officer  deleted the part. The returning officer for the GCC elections just happened to be the GCCs Chief Executive Margaret Coats  who would not have anything bad said about her beloved General Chiropractic Council.

Whether the associations can put their differences behind them for the sake of the profession will be the key in getting better regulation, Its ironic this has happened only a few days after Michael Pedigo’s passing.

Contrary to what many would like to believe I am not against regulation. However I believe bad regulation is worse than no regulation at all.I could point the finger of blame at Peter Dixon, Christina Cunliffe or the jobsworths appointed onto the reformed GCC in 2009. However one person stands head and shoulders above everyone in dragging the profession down and its the GCC chief executive Margaret Coats. She will say she has only followed the wishes of council, which is the wishes of the chiropractic profession seeing we have statutory self regulation. The fact so few were willing to stand up to her speaks volumes about the type of person she is.

The writing was on the wall when GCC employee Maxine White resigned her position after 3 months alleging Coats was a bully. Not for the first times the allegations were brushed under the carpet after council member Martin Caple conducted his investigation and gave Coats a clean bill of health without speaking to Maxine.

The cover up of the rogue activities of her Coats deputy Greg Price and the fact he was given a reference to work at another health regulator should have sent bells ringing. Coats was able to control GCC members by doing things like bringing in civil servant Graham Donald into the GCC after his retirement (the man who dealt with complaints about the GCC for the Privy Council) to find out what the privy council knew from other council members. Coats other source of control were the “anonymous” assessment forms council members did on each other. Coats decided who would assesses who and gleaned much information on where loyalties lay on the basis of those forms. I suspected they were not “anonymous” and she was using them for her own ends. Sure enough I got an e-mail when I did not sent mine in when she was trying to establish my relations ship with Graham Heale, Marc Cashley and Carl Lago. Dixon and Coats have just recently completed their investigation into their use of private investigators and how the other conducted themselves which I hope will finally bring about their down fall.

Much will depend on how the Associations conduct themselves and make their case against Coats. The agreement between the associations is only the first step and it must endure for the future of the profession, that may rise from the ashes that the GCC (not the skeptics) have created. In Cuba the first lesson taught on the first day of primary school is that co-operation is better than competition (see below). I hope the chiropractic profession will take that on board now. 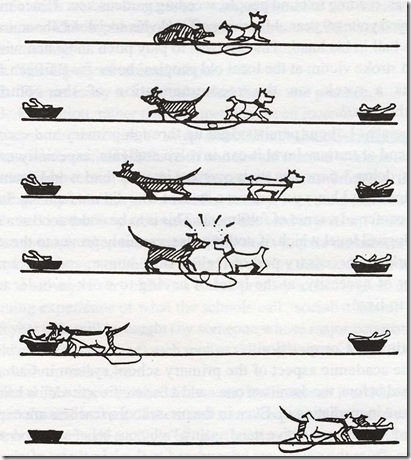 45 comments for “The associations have come together. First thing they need to say to the General Chiropractic Council; Margaret Coats must go.”