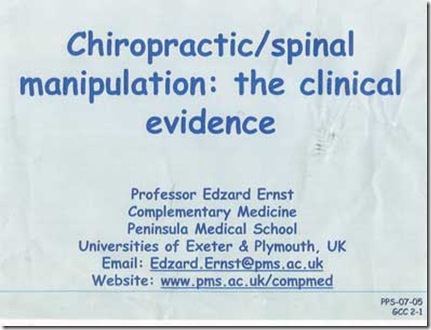 Apparently its ok for chiropractors to say they treat sciatica.

After telling the profession that chiropractors were misleading the public by claiming to help people with sciatica .According to the latest bulletin on the GCC website: “Following his review of Santilli et al Professor Bronfort considered that the level of evidence for manipulation for sciatica/radiating leg pain should be changed from INCONCLUSIVE but favourable, to a moderate level of POSITIVE evidence when compared to sham manipulation”.

What is truly laughable about this piece of news is that it is not new research it has been lying  around the GCC offices since March 2006.It is rumoured it fell out of Ernsts bag after his lecture to GCC members in July 2005. Ernst and the GCC  may have conspired to hide the good stuff, in their efforts to make chiropractors look bad, which is about the only thing the GCC has done well while regulating the profession.

No doubt so obsessed were those on the GCC Education Committee with subluxation  and getting Skeptic Barista off their back, they forgot all the evidence that would help chiropractors under investigation for claiming to help people with Sciatica.

This is how the GCC explain this extraordinary oversight.

About the UK evidence report: the chronology

June 2009
The GCC commissioned a review of the evidence base for advertised claims made by chiropractors across a very wide range of conditions.

25 February 2010
The Effectiveness of manual therapies: the UK evidence report by Gert Bronfort et al was published by the journal Chiropractic & Osteopathy.

Commentaries accompanying the report by Professor Scott Haldeman and Professor Martin Underwood and published by Chiropractic & Osteopathy can be read here.

For ease of reference, the evidence summary tables can be downloaded separately here.

March 2010
The GCC published Advertising guidance for chiropractors. It highlights that when chiropractors advertise their services in the UK any claims must be based on best research of the highest standard. It refers to relevant UK law and the UK bodies responsible for regulating advertising. It emphasises that the GCC’s Code and Standard must be observed and urges chiropractors to use the Bronfort report, and the evidence summary tables, to review the content of their advertising materials (whatever the medium used).

UK evidence report update
It is to be expected that over time research will evolve and/or new information will come to light.

In September 2010 we asked Professor Bronfort to review the level of evidence for manipulation for sciatica/radiating leg pain in the light of the publication in 2009 of a BMJ clinical evidence review: Herniated Lumbar Disc Clinical Evidence 2009;03:1118

A chiropractic organisation had drawn our attention to a study referenced within the BMJ clinical evidence review – Santilli et al concerning the effectiveness of manipulation for sciatica.*

October 2010: Sciatica
Following his review of Santilli et al Professor Bronfort considered that the level of evidence for manipulation for sciatica/radiating leg pain should be changed from INCONCLUSIVE but favourable, to a moderate level of POSITIVE evidence when compared to sham manipulation.

Professor Bronfort considered that Santilli et al has a low risk of bias and demonstrates manipulation to be superior to sham manipulation for sciatica/radiating leg pain in the short and long term.

In line with the methodology of the UK evidence review, the quality and findings of the Lawrence et al literature synthesis were not individually evaluated because its conclusions did not differ from the other similar systematic reviews.

← Is this the beginning of the end of Margaret Coats time as Chief executive of the General Chiropractic Council.
Michael Pedigo has passed on but the chiropractic profession needs to take on board his words and vision. →

10 comments for “The clowns at the General Chiropractic Council got it wrong on Sciatica. What a surprise!”