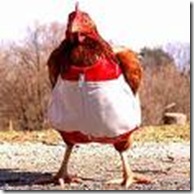 I got an anonymous letter from a group calling themselves “Guardians of Chiropractic” last week. The reported some shocking goings on at the GCC but as I have not been able to confirm the story or who wrote the letter I will not be publishing its content. What I will say if its true its bad news for the UK profession, but its far to late to do anything about Margaret Coats and the GCC.

That horse bolted a few years ago, and its because chiropractors like these guardians were “chicken” and did nothing. They  knew what was going on and kept their heads down and their mouths shut and allowed Dixon, Coats and Brown bring the chiropractic profession to its knees.

The guardians claim “We represent a group of troubled chiropractors, deeply concerned at the way our profession is heading” and “It is time for us to make a stand”

“We want the profession to know about this latest development and ask you to post this letter on chiropracticlive but at this time we wish to remain anonymous for fear of repercussions; however expect to hear more from us in the future.”

I have no interest in hearing from people who wish to hide from Coats et al. Whatever my opinion of Dixon and Brown, they are chiropractors who  believe they are acting in the chiropractic professions best interest. At least they put themselves forward  to pursue their goals rather than hoping an anonymous letter might offer an alternative for chiropractors.