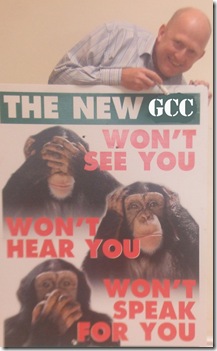 Coats and Dixon were in Birmingham today telling the gathered chiropractors how passionate they are about chiropractic. Apparently Margaret Coats sees a chiropractor regularly, I am sorry I dont buy that, she knows so little about chiropractic and  who would be stupid enough to take on a patient, who might write to Alan Hennes informing them of possible breaches of the code of practice urging him to complain to the Investigating Committee.

GCC chairman Dixon was all smiles in Birmingham, as he is in the latest GCC newsletter where he tells the profession that he has found the consultation with the profession “enjoyable and challenging in equal measure – all have generated thoughtful feedback to which we will listen. One of the advantages of meeting chiropractors face to face is that it’s easier to explain the context of the proposals we’re consulting upon, answer questions fully, try to allay anxieties and knock a few myths on the head”.

Excuse me while I throw up.

Just as in 2006 when he ignored the professions lack of confidence in the regulator describing the survey that found 77% of chiropractors had no confidence in the GCC as questionable. We dont seem to have access to that newsletter anymore on the GCC website http://www.gcc-uk.org/page.cfm?page_id=19. In Birmingham today there was no mention of the meeting of 17th of November when presumably they were told that  none of the chiropractic associations had confidence in  them and they must be under  pressure to go and I hear an Extraordinary meeting of the GCC has been called by Dixon.

The last EGM Dixon called was to have me removed for calling Coats a liar, my solicitor from  Russell, Jones and Walker explained that although Coats had not provided the council with correct information that did not make her a liar and I was advised to withdraw the remark which I did.

During this time it came to my attention that Coats had been consulting my law firm on another matter and  there was a concern that there could have been a conflict of interest. I never found out why she had consulted with Russell, Jones and Walker who were not the GCC solicitors, but the suspicion was that if she could not get me removed from council she was angling for a case of constructive dismissal and would have been represented by someone from Russsel, Jones and Walker. GCC members were terrified of this scenario because they would not have had the money to pay her off and I suspect she may now return to this cash cow.

Another little bit of “misinformation” Coats and Dixon told the gathered chiropractors today was that they could not have known the ASA would take the  line they have on chiropractic, so let me help and jog their memory.

At the November 2007 closed meeting of council Coats announced to us that she had made complaints to the ASA about claims being made by Christian Farthing DC and Peter Olsen DC. I  asked what the complaints were about and she and she responded with  a dismissive “Why do you want to know”?” I said as these guys trained as chiropractors and were practicing chiropractic any claims they were making were relevant to registered chiropractors who could be making the same claims as usual I was a lone voice and no one paid any attention to what would become a tsunami for the profession in 2009.

All Coats could think about was these people were able to work and she wanted to put any obstacle she could find in their way. I have asked the ASA who their chiropractic experts are? They declined to provide that information but I can give one guess and I would bet the majority of  complaints about chiropractic to the ASA were made by the GCC about trained chiropractors who choose not to be on the register

So if Coats and Dixon told you today that they had no idea that the ASA would take this line on chiropractic advertising remind them of the the complaints Coats made to the ASA.

← Being kind and friendly helps patients get better.
Unfortunately Peter Dixon and the General Chiropractic Council are 3 years and 700 complaints too late. →

62 comments for “Its getting harder and harder for Coats and Dixon to mislead the profession. There is a paper trail, You just need to know where to look in GCC “closed” minutes.”