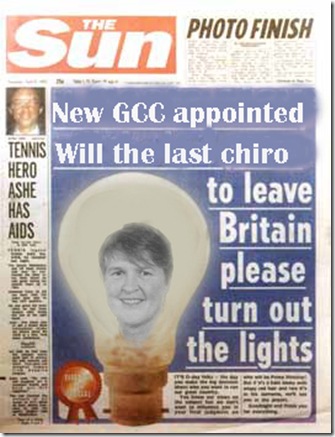 On the 18th of September at the BCA AGM a motion was passed “that the BCA membership had no confidence in GCC’s processes, interpretation and proportionality in its regulation of the chiropractic profession”.

My view was they should have named names and stated they had no confidence in Margaret Coats and Peter Dixon which would have been more to the point. What amazed me most; 22 BCA members did not support the motion, you would have to ask what planet they have been on recently.

It would seem these events have spurred the BCA council into action and at long last they are putting their heads above the parapet. One of the BCAs criticisms of the GCC, is its failure to disclose information to defendants in a timely manner.

Interestingly Margaret Coats and her office  have form here ; In 2005 the GCC was criticised by a high court judge for its failure to disclose evidence to a defendant chiropractor Warren Gage https://www.chiropracticlive.com/?p=98 appears they learned nothing from that slap on the wrist.

Hopefully the BCA council has finally discovered its purpose and  decided to protect the interests of its members and point out to the profession and GCC council members  that the involvement of Margaret Coats in the investigative process is not always objective and often goes way beyond her area of responsibility as Registrar, Chief executive, Secretary to the education committee, returning officer etc etc. In addition she may have told a few porkies to justify her actions in relation to investigating some cases

The BCA have concluded that Margaret Coats “involvement in the investigation process taints the process so fundamentally that there is a potential breach of The Chiropractors Act 1994”.

With this in mind I would ask readers to take 30 minutes to read my removal statement and bear in mind what has gone on in Coats office over the last 15 years. I suspect she has not retired is because she can not afford to have anyone looking through her files.

← Is this propaganda from the BCA? Or do the Chiropractic Alliance have some explaining to do?
The clowns at the General Chiropractic Council got it wrong on Sciatica. What a surprise! →

21 comments for “Is this the beginning of the end of Margaret Coats time as Chief executive of the General Chiropractic Council.”