This is one of my favourite posting from the forums, written by a chiropractor I had always seen as an establishment figure. Unfortunately few had the courage to walk away. 17.5% VAT is a lot to give up. I left Tony 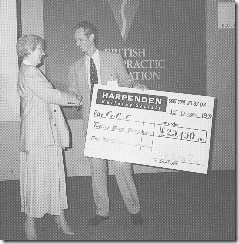 Gilmore did, Dana Greene, Frank McBride, . Ten years ago there was such enthusiasm for the GCC, chiropractors raising money to get this farce off the ground.  Graham Heale raised £23,00 and they came back and bit the hand that fed them.Twice.

Has the GCC not become analogous to a tumour in the body corporate – insinuated within the structure, its chemistry arranged to take-over right from the cellular level until eventually it monopolises the entire professional organism? Tumours require an abundant, constant blood supply to be viable and propagate. If that blood supply is cut off, the tumour loses its power, disintegrates and a healthier environment supervenes. Or so the bibles tell us!

By statutory regulation the GCC is required to be a self-funding institution. But its vital ‘blood supply’ has but one primary source: chiropractors’ registration payments. We provide the GCC’s life-blood. Effectively to kill the tumour means to kill its blood supply.

With regard to such affirmative action, one cannot imagine just how many registered chiropractors it would take – (maybe 1000…500…300…fewer?) – to provoke a lethal cytotoxic effect by simple inanition. But a ritual strangulation by collective withdrawal of financial support to the GCC, just simply and quietly excluding the £1000 fee at registration renewal time, might well be the daring treatment of choice at the field’s disposal.

In the end, how many of us are right now, angry enough, disappointed enough and fundamentally have guts enough concerning the survival and freedom of this our hardy independent pioneering profession – in order to stand up to be counted and at the same time steadfastly keep chequebooks out of sight through 15th November – and tucked away for as long as it takes to achieve a decent therapeutic effect after 31st December 2010?

In such circumstances of our own organising, would/could the GCC in the face of a clear, loud, concerted NO summon the audacity (let alone the authority) to have scores of recalcitrant colleagues individually indicted? Even if the GCC in its supreme authority through its CEO, went ahead, would enough police forces around the UK (after they had finished laughing) bother moving scarce resources from fighting crime and keeping order to attend to a civil administrative delivery role of petty authority notice-serving on 15…20…25%…more, of the established chiropractic profession for administrative delinquency and incurring trivial debt? Would constables demand they blank their signs forthwith and desist from adverting to or performing any kind of adjusting, to any kind of spines, as any kind of chiro——-? An extraordinary scenario unfolds, of a condemnatory GCC rounding on its own, like an old croc on its young, as if they had suddenly become a threat to public health and safety by merely failing to provide the means to register with their un/completed forms?

We have all had our tolerance extended by the punitive, facultative GCC living in our professional faces for the last eight years. Is it not time to flex for change? Change simply requires enough of us, at the same time, to be fed up, to say so and to invoke en masse the equivalent of an old right – to withdraw labour. By an act of civil disobedience, we can withdraw the means of survival for our statutory overseer and magistrate that less and less of the profession endorses, respects or wholeheartedly feels it can support.

Certainly such a bold move as cutting off money supply would be a brave act – one of unique defiance by a conventionally mild, law-abiding community – but it would also demonstrate that we are a mature, self-willed profession, concerned for its future, demonstrating unity of purpose and action in its own interests (ahead of, but not to the exclusion of its publics), refusing reliance on or intimidation by 3rd party controllers constitutionally removed from a chiropractic context. That would be an empowering situation for all of us who thought such assertive idealism belonged to our primitive past, when the direction of oppression came from outside.

One point of view is that change ought to be evolutionary and organic. But sometimes it needs to be…precipitant. Presently few options remain open to chiropractors of principle to be instruments of self-transformation as these rust or become surrendered into the hands of mere managers and enforcers.

← Would Herbert Ross Reaver have remained on the register of the General Chiropractic Council
These are my comments on the article professor Edzard Ernst had published in the New Scientist last summer about chiropractic. →