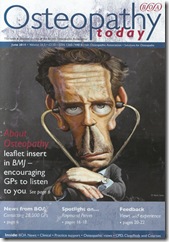 There are twice as many Osteopeaths in the UK as chiropractors when  only five years ago it was a third, there are possibly ten times more chiropractors practicing around the world than Osteopaths.

When I was on the GCC council the Registrar was refusing registration to about 50% of overseas applicants, others might say its because in normal times the General Chiropractic Council manages to have four times more PCC hearings than the General Osteopathic Council. Now the GCC has about 60 times more complaints and therefore many chiropractors are resigning from the register.

Osteopaths are not as hung up on how much time their graduate spent on the campus during their training, its far more important to look at the outcomes of the course of study rather than whether it was part time or a full time course.

Edzard Ernst would say Osteopathic “manipulation” is safer and more effective he has not explained physiologically why this might be so and I dont believe the differences are as large as many would have you believe. My own view is that Ostepaths seem to take a much more sensible pragmatic view of their profession, are not as intolerant and focus on what Osteopaths have in common rather than their differences and they pay little attention to the political decisions of their American colleagues.

I was reading the latest edition of “Osteopathy Today” ( The Magazine for members of the British Osteopathic Association”) which carried an article “ASA update” keeping members up to date with the complaints being made against chiropractors. Its not pushing a political agenda its just keeping their members informed. 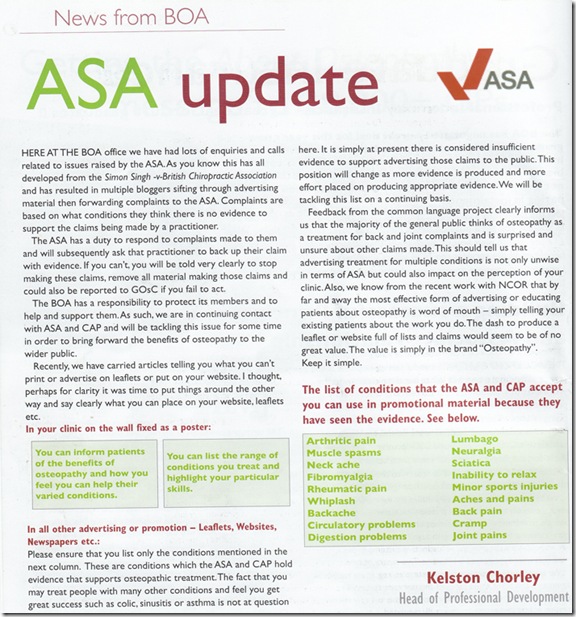 The BOA are not saying you have to practice in a certain way, they are explaining the ASA rules to help their members in practice.

I still dont think chiropractors should define what they do in terms of treating conditions however if you do practice that way, I thought this article  would be useful, as I can not see the BCA or GCC informing chiropractors that the ASA has accepted evidence for “manipulation” in relation to “circulatory problems”  or “digestive problems” etc.

← General Chiropractic Council would like to hear the skeptics complaints in private because they can not afford public hearings. Should chiropractors help them? Should chiropractors trust them?
It would appear the GCC acted illegally when they instructed private investigators to spy on me. →

17 comments for “Why is the osteopathic profession growing at a much faster rate than the chiropractic profession in the UK? Are they just nicer people?”