CAM whingers  attach way too much importance to the editor of the BMJs denouncement of the chiropractors plethora of evidence.They should remember that 100 years ago DD Palmer the founder of chiropractic had the sense to recognise the failings of an approach to health searching for  chemical panaceas. Ivan Illich continued this theme in the 70s with his “Medical Nemesis”, by “being focused on disease medicine has marginalised itself from the majority of healthy people”.

Yes there are inaccuracies in the writings of DD Palmer but I can say with certainty nothing he wrote over a 100 years ago was as misguided as medical professions promotion of smoking in the 50s. 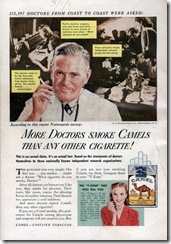 and the Journal of the American Medical Association carrying these adds.

Yes its another “straw man” (lets can call this one Dr Finlay), so who should people who have not developed pathology go to when they need help with their wellbeing. Reading whinger blogs their advice seems to be, the problems people consult CAM practitioners with, will go away by themselves, so dont waste your money on CAM.

In other words take a few pills to relieve any discomfort wait for the problem to become chronic and pathology  develop then consult a medical expert, hardly surprising the NHS costs so much with this approach. This was the advice medics were giving people with back pain as recently as 1995, bed rest and pain killers?

Who was it that that was recommending movement and set up a massive rehabilitation centre in Davenport at the same time as the medics were recommending smoking DD’s son BJ no less. 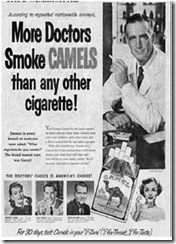 From one of the adverts:

"I’ll Be Right Over!" . . .24 hours a day your doctor is "on duty". . .guarding health. . .protecting and prolonging life. . .*plays. . .novels. . .motion pictures. . .have been written about he "man in white" and his devotion to duty. But in his daily routine he lives more drama, and displays more devotion to the oath he has taken, than the most imaginative mind could ever invent. And he asks no special credit. When there’s a job to do, he does it. A few winks of sleep. . .a few puffs of a cigarette. . .and he’s back at that job again. . . According to a recent Nationwide survey: More Doctors Smoke Camels Than Any Other Cigarette! Three of America’s leading independent research organizations asked 113,597 doctors to name the cigarette they themselves preferred to smoke. The answers came in by the thousands. . .from doctors  in big cities, in small towns. . .from general physicians, diagnosticians, surgeons, specialists—doctors in every branch of medicine! Results? More doctors named Camels as their smoke than any other cigarette! Yes, a doctor, too, smokes for pleasure. Full flavor, coolness, and mildness mean just as much to him as they do to any other smoker. Smoke Camels and see for yourself. The "T–Zone" test will tell you The "T–Zone" —T for taste and T for throat–is your own laboratory for any cigarette. For only your taste and your throat can decide which cigarette tastes best to you. . .and how it agrees with your throat. On the basis of the experience of many, many millions of smokers, we believe Camels will suit your "T–Zone" to a "T." Camels Costlier Tobaccos

← Vascular incidents happen in GP and Chiropractic clinics there is no epidemiological evidence that spinal manipulation is a causative factor.
Is General Chiropractic Council Chief Executive Margaret Coats a bigger bully than Gordon Brown? →

8 comments for “Which health care profession has given the most ludicrous endorsement ever?”