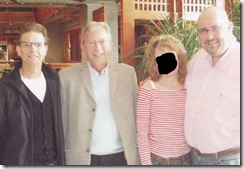 This guy has been president of the World federation of Chiropractic and this comment will always make me laugh. To be honest I did not think the case would be as big as it became, but the BCA people must have been on a different planet.

In the June BCA members Newsletter “In Touch” the President of the BCA Tony Metcalfe reassures members and advises them to keep the Simon Singh issue “in perspective”. He asks “how many of your patients are aware of what is going on? I can tell you that none of my patients have raised any issues of concern with me and are not in the slightest bit interested in the Singh legal action” I was reminded of Basil telling the staff, “dont mention the war to the Germans.

As bad as this is for the chiropractic profession one can only laugh at the naivety or stupidity of the BCA leadership, they are complicit in allowing the profession to be judged on practices that account for less than five percent of what chiropractors see in practise. Ben Goldacres article (below)suggest this controversy  may only be beginning. Its like one of those “Revenge of the Nerds” movies.

The leadership of the UK chiropractic profession do little hoping this will just go away. The reality is the controversy is gathering momentum internationally. Its had wide spread coverage in Austrialia, last Sunday the Irish Independent picked it up,

Americans will love the BCA suing  Simon Singh because he called chiropractic bogus.

Will Trick or treatment hurt the chiropractic profession the way the Ralph Lee Smith book did in the the 60s. As Eleanor Roosevelt said “Only if you let them”. First though Tony Metcalfe et al must go, before the rehabilitation can begin.

An intrepid, ragged band of bloggers by Ben Goldacre The Guardian

Today the Australian magazine Cosmos, along with a vast number of other blogs and publications, reprinted an article by Simon Singh, in slightly tweaked form, in an act of solidarity. The British Chiropractic Association has been suing Singh personally for the past 15 months, over a piece in the Guardian where he criticised the BCA for claiming that its members could treat children for colic, ear infections, asthma, prolonged crying, and sleeping and feeding conditions by manipulating their spines.

The BCA maintains that the efficacy of these treatments is well documented. Singh said that claims were made without sufficient evidence, described the treatments as "bogus", and criticised the BCA for "happily promoting" them. At a preliminary hearing in May, to decide the meaning of this article, Mr Justice Eady ruled that Singh’s wording implied the BCA was being deliberately dishonest. Singh has repeatedly been clear that he never intended this meaning, but has been forced to defend this single utterance, out of his own pocket, at a cost that has run to six figures.

Soon we will get to the story of the backlash, but first, while you may view this as a free speech issue, there are also some specific worries raised when people sue in medicine and science.

It is possible in healthcare to do great harm, while intending to do good, and so medicine thrives on criticism: this is how ideas improve, and therefore how lives are saved. The three most highly rated articles in the latest chart from the British Medical Journal are all highly critical of medical practice. Academic conferences are often bloodbaths. To stand in the way of ideas and practices being improved through critical appraisal is not just dangerous, it is disrespectful to patients, and even if someone has been technically defamatory in their wording, it is plainly undesirable for all critical discourse in healthcare to be conducted in a stifling climate of fear. Neither the General Medical Council nor the British Medical Association have ever sued anyone for saying that their members are up to no good. I asked them. The idea is laughable.

But beyond whether it is right, there is the more entertaining issue of whether it was wise, and here it is hard to contain a sense of schadenfreude as the chiropractors’ world unravels. First, there is the media exposure. This case and the chilling effects of libel threats in science have now been covered by the Times, the Daily Mail, the Daily Telegraph, the Independent, Nature, the Economist, Times Higher Education, the Sunday Times, Channel 4, the Financial Times, the Wall Street Journal, Private Eye, the Observer, the BBC, and an editorial in the British Medical Journal, to name just a few. This story has travelled around the world.

Most of these articles drew attention to the evidence for chiropractic’s efficacy, which is often not compelling. Some discussed chiropractic’s dubious origins: it was invented by a magnet therapist, convicted of practising medicine without a licence, who suddenly decided in 1895 that 95% of all diseases are caused by displaced vertebrae, and compared himself to Christ, Muhammad and Martin Luther. Who knew?

An international petition against the BCA has been signed by professors, journalists, celebrities and more, with Ricky Gervais and Stephen Fry alongside the previous head of the Medical Research Council and the last government chief scientific adviser. There have been public meetings, with stickers and badges. But it is a ragged band of science bloggers who has done the most detailed work. Fifteen months after the case began, the BCA finally released the academic evidence it was using to support specific claims. Within 24 hours this was taken apart meticulously by bloggers, referencing primary research papers, and looking in every corner.

Professor David Colquhoun of UCL pointed out, on infant colic, that the BCA cited weak evidence in its favour, while ignoring strong evidence contradicting its claims. He posted the evidence and explained it. LayScience flagged up the BCA selectively quoting a Cochrane review. Every stone was turned by Quackometer, APGaylard, Gimpyblog, EvidenceMatters, Dr Petra Boynton, MinistryofTruth, Holfordwatch, legal blogger Jack of Kent, and many more. At every turn they have taken the opportunity to explain a different principle of evidence based medicine – the sin of cherry-picking results, the ways a clinical trial can be unfair by design – to an engaged lay audience, with clarity as well as swagger.

Then the formal complaints began. There have been successes with the Advertising Standards Authority, including one which concluded that claims to treat colic breached the guidelines on "truthfulness" and "substantiation". This interested many, since treating colic was a claim sued over by the BCA when Singh called it "bogus".

Professional complaints followed in May, mostly about individual chiropractors’ claims. Then, in June, blogger Simon Perry found the BCA database of 1,029 members online, containing 400 website URLs. He wrote a quick computer program to automatically identify all the chiropractors in the UK claiming to treat colic, locate their local Trading Standards office, and report them (more than 500 in total) automatically, followed up with printed letters.

Chiropractic is also a profession regulated by the General Chiropractic Council, supervised by the Health Professional Council, which are obliged to investigate all complaints. So Perry reported over 500 chiropractors to them, alleging they had made claims without adequate evidence. The GCC rejected his letter, saying it only takes individual complaints. A pile of individual complaint letters were instantly generated and delivered to their door. Astonishingly, ZenosBlog had done exactly the same thing. These 1,000 complaints are now being investigated.

You may view this as bullying individuals, and initially I had some sympathies. But my heart was hardened, reading commentary from the chiropractic and alternative therapy community, saying Singh must expect six-figure consequences for criticising them, and transgressing the letter of the law, even in just one article.

Some clue to whether chiropractors feel able to defend these complaints over the evidence for their practices came a few days later. On 8 June the McTimoney Chiropractic Association sent a confidential email to its members, which has been obtained and is available in full on Quackometer. "If you have a website," this email begins, "take it down NOW … REMOVE all the blue MCA patient information leaflets, or any patient information leaflets of your own that state you treat whiplash, colic or other childhood problems in your clinic … IF YOU DO NOT FOLLOW THIS ADVICE, YOU MAY BE AT RISK FROM PROSECUTION. Finally, we strongly suggest you do NOT discuss this with others" – and on this they were clear – "especially patients."

The MCA says this is a "vexatious campaign against the profession", that it has nothing to hide, and believes its members have not intentionally breached any rules regarding their websites’ content. The entire MCA website disappeared on the same day, and continues to be nothing more than a holding page (it "is currently being updated"), but its former site, along with every single chiropractor’s website, has been archived in full online by the science blogging community, for anyone who is interested to look.

We could go on, but there are lessons from this debacle – beyond the ethical concerns over suing in the field of science and medicine – and they are clear. First, if you have reputation and superficial plausibility more than evidence to support your activities, then it may be wise to keep under the radar, rather than start expensive fights. But more interestingly than that, a ragged band of bloggers from all walks of life has, to my mind, done a better job of subjecting an entire industry’s claims to meaningful, public, scientific scrutiny than the media, the industry itself, and even its own regulator. It’s strange this task has fallen to them, but I’m glad someone is doing it, and they do it very, very well indeed.

← Simon Singhs Guardian article and my analysis
If your infant has Colic why not try spinal care? ( dare I say chiropractic) →