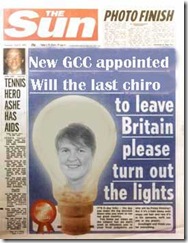 Look at the facts. I was removed from the council early in 2008, tried to rally the profession to take on the GCC, accepted failure in June 2008 and moved on with my life. I resigned from the GCC register in January 2009 and was extremely happy to have put chiropractic politics behind me. The only thing I could think of was the words of my chiropractic mentor Ole Wessungs on my last night in Copenhagen as I set off for AECC in 1990. “Dont get evolved in Chiropractic Politics”. My partner and I laughed about it as I began to focus on my practice again.

In February the clinic started to get strange calls asking was I a chiropractor? Lots of people making appointments not showing up. Patients coming in for the first visit and not coming for the second. Then one day this guy comes in and he should have had Private eye written on his forehead. He keeps on at a young receptionist; Is he a chiropractor? NO! But he trained as a chiropractor he must be a chiropractor? (I believe thats whats called a rhetorical question) He is not a chiropractor. A patient waitingto be adjusted had to intervene to say; “she has told you ten times”. Magnum PI, left with the paper all patients have to sign stating they understand Richard Lanigan resigned from the GCC register and no longer call himself a chiropractor. I told chiropractic friends what I suspected and they said I was being paranoid, “even the GCC would not do that”

I called a friend a graduate of AECC who had been arrested and spent four hours in the cells for calling himself a chiropractor. He showed me the arrest forms, the tape of the police interview and the report from the GCC, supported with the evidence gathered by the Private investigators, I knew I was right. I immediately sent a freedom of information request to the GCC, figuring that as they were still gathering evidence, they would not be able to lie about the investigation, as they would be unable to use any evidence in court. Paul Ghuman  admited that the GCC had instructed Private investigators to watch me, but had not yet received a report.

I was flattered by the size of the bundle the GCC KGB were holding on me, but there was nothing about this investigation. I wrote again, they refused claiming an “Exemption” for me having this information. You would expect this in Zimbabwe not in a free society in England. I have complained to the Information Commissioners Office. They made MPs reveal their expenses, and I am confident they will make the GCC reveal who ordered this investigation.

Which brings me to why I have started blogging again. I need publicity, because I need the public to know I am not on the chiropractic register and I am hoping a journalist may pick up the story. The blog had 1,700 hits today so who knows. The more people that know that I am not on the GCC register, the harder it is for the GCC to allege that I am misleading the public and  “Implying”that I am a chiropractor by leaving my qualifications on the wall. Simon Sing et al can think what they like about chiropractic, I have helped many people over the years, they will continue to recommend me to their friends and will continue to do so. I supose if you did not have a good reputation you might be concerned what the sceptics or the GCC had to say about

If I wanted revenge, I would have been part of the class action being organised against the GCC from the start. I told them I had moved on I did not care about the GCC, I think my words were its your bed you can lay on it, chiropractors choose the GCC, I choose to leave and pay VAT. I only contacted the people taking legal action when I dicovered the GCC had sent their spies into my clinic.

My MP invited me to the House of Commons in July to discuss my experience working as a chiropractor in the Cuban health service, I mentioned the GCC and he was willing to ask a question, when I got home, I realised I had moved on and did not bother. The only communication I have had with chiropractors was to send an e-mail round when the GCC announced a former president of the chartered physiotherapists, was chairing the GCC Education Committee. Everyone enjoys a bit of “Told you so”including me.

I have been a passionate advocate of chiropractic since 1985, I did not want registration with McTimoney but when it happened I have always shown respect to McTimoney chiropractors and treated them as colleagues. In fact two of the people I respect most in the profession are McTimoney, Tony Gilmore and Dana Greene.

However, I am appalled by the decision of the McTimoney Association (the second largest chiropractic association in Europe as Christina Cunliffe loves to remind everyone) to remove their websites this suggests to the public, they have been doing something wrong. This does not reflect well on chiropractic which is what I do every day, despite GCC efforts to stop me. Then people have the nerve to suggest it will be my fault if people lose their livelihood and they college is closed. That is in the GCCs hands not mine, registered chiropractors fund this body.

All I want is the GCC to leave me and my family alone, tell me who instructed the private investigators and who on the GCC knew about it, and let me get on with my life practising chiropractic. (My children have never had so much as a spoon full of Calpol, spinal care helps children, whatever the sceptics say)

Funny thing about all this is I got 18 e-mails from McTs telling me, your an arsehole and got 9  like the one below,

I was surprised to read the first line of your chiropracticlive article “I always suspected that the McTimoney association saw subluxation chiropractic as a flag of convenience, for GCC council member Christina Cunliffe to gain influence within the UCA and ICA and get McTimoney people elected onto the GCC.”

Richard I will be blunt here – you suspected??? It was plainly obvious. You were used by the mctimmoney therapists to get on there and it was because of you, almost single handedly, that they got there. And then they got you off there because it suited them to be aligned with Coats, Dixon, Byfield et al, but only after they (Coats, Dixon, Byfield et al) had used you too, using your departure as a smoke screen to bring in the physiotherapist and medic into the education committee. In hindsight have you come to realise this? You were instrumental in this very situation coming about.