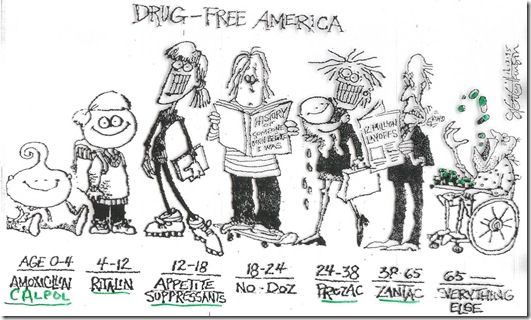 From the daily Telegraph Millions taking statins ‘needlessly’ why it took the scientists so long to figure this out beats me.

Up to 3 million people are taking statins needlessly, doctors warn today in a comprehensive study that suggests they are ineffective in many cases and could be doing more harm than good.

An authoritative review shows there is little evidence that the cholesterol-lowering drugs protect people who are not already at a high risk of heart disease.

As a result, the NHS is wasting large amounts of money on giving the drugs to the “worried well”, the researchers warn. In some cases, the side-effects of taking statins could outweigh the benefits, they say.

A number of studies have linked statins to liver problems, acute kidney failure and muscle damage.

Statins are thought to be taken by one in three people over 40. Up to seven million people in England take them, costing the NHS at least £450 million a year. A large proportion of these are at a low risk of heart problems and take the drugs to ward off future disease.

Experts who advocate the use of statins say they have helped prolong thousands of lives by preventing heart attacks and other cardiovascular events.

But a wide-ranging review of previous studies, published today in the journal The Cochrane Library, urges “caution” among GPs who prescribe them. It concludes that there is no “strong evidence” to suggest that statins reduce coronary heart disease deaths among those who have not suffered a heart attack or other cardiovascular event in the past.

Just one life is currently saved for every 1,000 people who take them each year, the report says.

Shah Ebrahim, a professor of public health at the London School of Hygiene and Tropical Medicine, who co-wrote the report, called on doctors to stop giving patients the drugs unnecessarily.

“What we are looking for is for GPs to review their patients’ cardiovascular disease risk levels, so we are not needlessly prescribing these treatments to people,” he said.

“Do we want to waste money on something that is taking up resources? Because it looks like a waste of money to me.”

The National Institute for Health and Clinical Excellence (Nice) recommends that doctors prescribe statins to those whose chance of suffering a heart attack, stroke or heart disease over the next 10 years is at least 20 per cent higher than normal.

Doctors are free to prescribe them to lower-risk patients and regularly do so. Statins can also be bought over pharmacy counters without a prescription.

No data exist on how many lower-risk people take statins, although it is thought to be several million as the drugs have often been hailed as a catch-all treatment that can help a variety of conditions.

Prof Ebrahim said he agreed with Nice’s advice, but argued against statin use among those at a lower risk.

He suggested that, among these people, statins could do more harm than good. “There are some small trials that show evidence of cognitive lapses and depression,” he said.

The authors also accused pharmaceutical companies of cherry-picking studies on statins that showed a positive impact for the sake of profit.

Fiona Taylor, also of the London School of Hygiene and Tropical Medicine, said: “We know that industry-sponsored trials are more likely to report favourable results for drugs versus placebos.”

Prof Ebrahim added: “Their aim is to get the maximum number of people on the drugs. It’s an old game.”

However, Prof Colin Baigent, of the Clinical Trial Service Unit at Oxford University, said the Cochrane review was already “out of date”.

Last year, the unit published results in The Lancet showing statins reduced deaths from all causes by 10 per cent over five years. This was mainly due to a 20 per cent drop in the number of deaths from coronary heart disease.

He said: “Statins are one of the great success stories of the last decade or two, and they have prevented many thousands of deaths.”

He dismissed Prof Ebrahim’s concerns over pharmaceutical firms’ control of statin trials as a “conspiracy theory” and said that testing for every potential harm was practically impossible. Experts said patients currently taking statins should consult their GP before deciding whether to carry on. Last week, Prof Nicholas Wald, the innovator of the “polypill” for preventing cardiovascular disease, told a meeting at the Royal Society in London that people should be able to get hold of such medicines more easily.

The Cochrane Library is published by Wiley-Blackwell on behalf of the Cochrane Collaboration, which describes itself as “the world’s leading producer of systematic [medical] reviews”.

← In 1895 Harvey Lillard had his hearing improved after a spinal adjustment by DD Palmer, scientists may be closer to understanding the mechanism.
AECC has removed all reference to chiropractic helping children with colic, otis media and flies the flag for the orthodox approach to children’s health. →

4 comments for “Prescribing is not an exact science and the chiropractic profession should stay well away from it.”