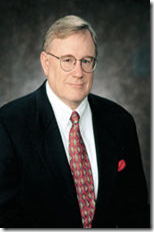 I was saddened to hear one of the five plaintiffs from the Wilk case  Michael Pedigo  passed away on the 10/10/2010.

The Wilk case should have been a watershed for the chiropractic profession. The book is a must read for chiropractors who care about their profession and where its headed unless they can put their egos away and work for the profession rather than self interest.

It amazed me how difficult it was for Chester Wilk  to get the chiropractic profession to unite behind him to fight for something that was in the entire professions common interest.

After their victory over the AMA in 1990 Wilk  pleaded with the Chiropractic profession to unite in; “educating and redirecting the thinking in the minds of many people as to what really constitutes rational, safe and effective health care. We won in the legal arena now we need to win in the public arena.” Chester Wilk gave up on trying to change chiropractors mind set some years ago however, Michael Pedigo kept going and I was fortunate enough to meet him when I was president of the student union in the mid 90s. 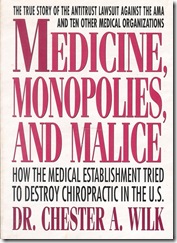 representing AECC at the Centennial celebration in Davenport in 1995

When DC Editor Don Petersen ( Editor of Dynamic chiropractic) first asked me to write a column, I was concerned about taking on another obligation that required a time commitment. But after further consideration, I accepted his offer. I appreciate the opportunity to share with you some of my thoughts and opinions about issues I feel are important to this profession.

I have chosen a lengthy title for the column because it makes a powerful statement I believe we all need to be reminded of from time to time, a statement that has had and continues to have a profound effect on my life. I hope that each time you see it, you will be encouraged to make a difference that makes the world a better place to live. In good and bad times we need to see the glass as half full rather than half empty, and we need to understand that our actions do make a difference. The question is will they be constructive or destructive.

This column will not be apolitical, and I will make no pretense that it is. Those that claim to be apolitical are not facing reality. Politics is nothing more than trying to convince others to support a point of view. Claiming to be apolitical is in itself political; it’s just an ineffective way to obtain results. Political strength in part comes from the clout created by joining together for a common cause. There is strength in numbers.

It is exciting to think about what this profession could have done to improve the quality of life if we had been united all of these years. It is shameful to think about all of the people who are suffering needlessly because our profession has been so fragmented and divided. It is unfortunate that we have never united to create the strength and clout necessary to educate the public and decision-makers about the value of chiropractic, nor to do enough of the research required to advance the profession on a solid foundation.

The AMA has certainly recognized the power of strength in numbers. During the height of their boycott in the ’60s and ’70s against the chiropractic profession, they had established a goal to "contain and eliminate" the entire chiropractic profession. Central to their effort were four major objectives to achieve their goal. During the discovery process of the lawsuit we found a memorandum from the AMA’s Committee on Quackery to the AMA Board of Trustees that outlined those objectives. One was: "To encourage continued separation of the two national chiropractic associations." They stated further: "The committee is of the opinion that if the two national chiropractic associations merge, a more effective effort on the part of chiropractic both on a statewide and national basis would be exerted, and the possibility of a more successful, overall program might be achieved."

Even though the AMA made the above statement in 1967, it is just as true today as it was then. As a plaintiff in the Wilk vs. AMA anti-trust lawsuit, when I first saw that document I was shocked and began to ask why doesn’t this profession unite? It made no sense then and it makes no sense today, especially since the differences that divided ACA and ICA were more perception than fact.

I make that statement based on observing the kinds of issues that the board of directors of our national associations deal with daily. From 1982 to 1985, I served on the board of directors of the ICA, California Chiropractic Association (CCA) and International Chiropractic Association of California (ICAC) at the same time. That was an eye-opening experience. I learned that rarely did issues come before these boards that were of the nature that would warrant our being divided, let alone even discussed.

When I was elected president of the ICA in 1985 I lead a major effort to bring about a fair merger between ACA and ICA. During those discussions I again observed that the differences dividing the boards were not anywhere near as great as the profession had been lead to believe. In fact it was a common occurrence to hear members from both sides talk about how they were shocked that we had so many areas of agreement and so few areas of disagreement. Unfortunately, for the people who need chiropractic care and don’t know it, the merger effort failed due to a minority of ICA members that were opposed to merger. The merger required a two-thirds majority vote to pass. Twice we got more than 50% majority vote, but we never got the needed two-thirds. I remain convinced to this day that the reason we did not get the two-thirds needed was because some in ICA used tactics consisting of distortions and false statements to create fear in the hearts of many good ICA members. There is always a certain fear of the unknown, and when those fears were fueled by false statements and distortions of the facts it caused many that knew in their hearts merger was the best thing for the profession to vote against it.

In 1989 I resigned as chairman of the ICA Board to join with the ACA and have been active in the ACA every since. This was not an easy decision for me to make, but I did so because it was apparent to me that ACA was the only national association with the strength and clout to move this profession forward. I am currently serving as vice president of ACA and will be a candidate for president this June. I am also currently president of the California Chiropractic Association.

We are all the creation of the sum total of events and experiences that have occurred in our lives. Our backgrounds play an important role in the way we rationalize things and the opinions we hold. Since I will be expressing some of my opinions over the next two years in this column, I wanted to share with you some of the events that have played important roles in shaping my life, and to let you know that I have a strong background in the inner workings of ACA, ICA and state associations. When I say that the differences that divide us are more perception than fact I make that statement based on factual knowledge about what our associations do.

ACA and ICA recently co-sponsored a leadership conference involving many of the profession’s leaders. Out of that meeting came a recommendation that an alliance be formed to do a much needed nation-wide PR campaign. I am hopeful that this will come to pass. However, when considering the cost/benefit ratio of being united vs. being divided, it is clear that being united under the roof of one national association is the most efficient way to use our resources and the most effective way for this profession to fight those that would harm our profession, and to advance our profession into the health care system of the next century. To all of the thousands of you who make up some excuse for not belonging, it’s time to pull your fair share of the load by joining your state and national associations. There will never be an association that pleases everyone all of the time, but if you don’t belong you don’t have an opportunity to change it. Associations are living, dynamic organizations that change as their membership changes. If you don’t like something join and work for change