Zeno is angry because he believes chiropractic is bogus, he has made 600 complaints to the GCC and founded a new website Discover Chiropractic on which he

offers this advice; If you have a medical condition or think that you might, or are worried about your health in any way, consult your registered medical practitioner. You can check that your doctor is properly regulated and licenced to practice medicine in the UK by checking their details in the List of Registered Medical Practitioners held by the General Medical Council.” 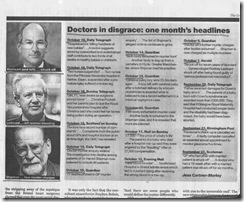 A doctor who prescribed "potentially hazardous" levels of drugs to elderly patients who later died has escaped being struck off.

Dr Jane Barton will be allowed to continue working under certain conditions despite being found guilty of serious professional misconduct.

She was accused of a series of failings in her care of 12 patients at Gosport War Memorial Hospital in the 1990s. 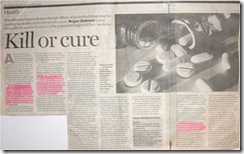 Relatives and the General Medical Council criticised the panel’s ruling.

Family members of those who had died shouted at the fitness to practise panel when the decision was delivered in central London.

Iain Wilson, the son of Robert Wilson, one of the patients who died, shouted: "You should hang your head in shame."

The panel had previously heard that elderly patients were left in "drug-induced comas" after being over-prescribed painkillers and sedatives.

Dr Barton was found guilty of putting her patients at risk of premature death.

But the panel said it had taken into account her 10 years of safe practice as a GP in Gosport and 200 letters of support.

1 comment for “Medicine is far more dangerous than chiropractic.”