Sceptic Simon Perry made the following comment (in red) in relation to an amusing posting on Alun Salts blog:

“It’s been a good month for baiting morons in areas other than science. Jack of Kent first did it with a homeopath’s legal knowledge, now the BCA on history.
This post is not complete without an excerpt from Harry Frankfurt’s "On Bullshit".

"It is impossible for someone to lie unless he thinks he knows the truth. Producing bullshit requires no such conviction. A person who lies is thereby responding to the truth, and he is to that extent respectful of it. When an honest man speaks, he says only what he believes to be true; and for the liar, it is correspondingly indispensable that he considers his statements to be false. For the bullshitter, however, all these bets are off: he is neither on the side of the true nor on the side of the false. His eye is not on the facts at all, as the eyes of the honest man and of the liar are, except insofar as they may be pertinent to his interest in getting away with what he says. He does not care whether the things he says describe reality correctly. He just picks them out, or makes them up, to suit his purpose."

According to Wikipedia, a Moron is disused term for a person with a mental age between 8 and 12. Now I have to be honest here my partner Janette frequently describes me under that criteria as do many in positions of authority.

Simons quotation on “bullshit” definitely lit a candle where there was darkness. He seems to know much about it, if not so much about “Evidence Based Practice”. Simon may think I am a moron and I would ask all “comments” on this posting to refrain from calling Simon simple because of his failure to grasp “evidence based clinical practice. I explained how I understood David Sackets concept of EBM and none of the sceptics made a comment on it. Fortunately the AECC has a postgraduate course on Evidence Based Clinical Practise in November and the course is directed at all those who struggle to get beyond the concept that “randomised controlled trials”  RCTs are the only evidence acceptable for clinical application.

In a talk given to members of the GCC in July 2006 Professor Edzard Ernst explained, that there is a Hierarchy of evidence. At the top of his pyramid are Systematic reviews of RCTs and at the bottom of the hierarchy are case studies.

In his latest posting Simon  Simon does not seem able to grasp this concept. Simon states: (in red) 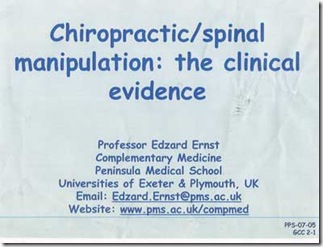 “For the purpose of clarity, I’d like to add that there is no evidence that chiropractic can help alleviate the symptoms of infant colic.


But some criticism has pointed out that I’m not suggesting an alternative treatment, and while no evidence-based treatment for infant colic exists, it makes sense to use a treatment with no evidence for its effectiveness.

I will now explain why this position is wrong. 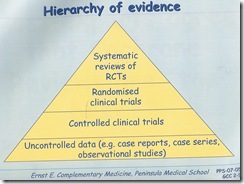 Simon who possibly worships at the alter of scientific truths, states “bathing your child in tomato juice” and is as ineffective as chiropractic. What ever Simon thinks of the quality of the evidence, the fact is some “evidence” has shown chiropractic to be an effective intervention for colic. For the purpose of simplicity I provide a link to a case study  (just one)in a peer reviewed journal. Is this proof that chiropractic cures colic, absolutely not, however it is a small piece of evidence thats gets onto the bottom of Professor Ernst’s pyramid.

For Simon et al to keep repeating that there is no evidence that chiropractic might help colic is simply not true. Simon makes what would seem a reasonable assumption, that tomato juice would not help Colic, because he sees no reason why this juice or chiropractic treatment could help. However someone who knew something about physiology and confounders in clinical research might ask; what temperature will the tomato juice be at, because research has shown bathing a child in warm water may be an effective treatment for colic, dipping the baby in ice cold juice may shock the baby into stopping crying without causing hypothermia because of brown fat. This study may not get ethical approval however some researchers have tried smothering babies looking at Cot death.

For all Simon knows, the juice “theory” could lead to an effective treatment for colic and Simon has dismissed it simply because he does not believe temperature could have an effect on the autonomic nervous system, which his reductionist analysis failed to consider. I can also see many more compelling reasons why stimulating spinal joint receptors, could help a properly diagnosed case of colic. Further study is needed however, it is worth trying is what I would say to a parent who asked if I could help their infant.

Clinical decision making is not as simple as the Leicester Skeptics in the Pub would have us believe. Look at Professor Ernsts hierarchy of evidence, most of chiropractic evidence may be on the lowest rung, however its there, which is a lot more than can be said of many complementary therapies and recent events may very well turn many  complementary therapists away from doing research.

I am more than happy any Sunday to come to the pub in Leicester and answer questions your sceptics may have about how I practice woo.

Simon I have not criticised you for making your complaint to the ASA. I believe it is the right any member of the public to complain to the proper authorities on any issue they feel strongly about and I am the last person to have a go a someone for complaining about the GCC.

The point I made was, I dont think you have interpreted evidence based clinical practice the way David Sackett intended and to start calling people  Morons on the basis of that understanding is poor form.

← The BCA should know,you never pick a fight with people who buy ink by the barrel.
Andy Lewis refuses to offer the quackometer’s $100 challenge to Richard Lanigan. Better be quack than chicken. →

1 comment for ““Morons and Bullshit”; the world according to Simon Perry”