Professor Edzard Ernst is professor of complementary medicine at the Peninsula Medical School, University of Exeter and in his latest article in Pulse he announces to GPs the revelation that “There is a Division in UK Chiropractic” .

Correct me if I am wrong here. Is this the same Edzard Ernst who for years has presented himself as an authority on chiropractic and the theory which it is based on. All this knowledge and he did not know the profession was split into two camps. In doing all his research into the efficacy and risks of chiropractic, he must have interviewed  a few chiropractors to draw his conclusions and he would have us believe he did not know there were two approaches to chiropractic practice.

Of course he knew, however this time his effort to scrape the dirt from a barrel is pretty obvious. Ernst does this all the time trying to make  regurgitated old stuff sound new. In May Ernst told his readers I had criticised him unfairly in my critic of his New Scientist article. He is entitled to his opinion but what I find particularly galling is having read my critique to repeat the lie in the latest Pulse article  “It seems that UK chiropractic is heading for a division: the ‘fundamentalists’ are likely to adhere to the dogma of their founding fathers. Thus they might believe in the notion that ‘subluxations’ are the cause of all human diseases and treat them with spinal manipulation”.

This is my part of my critique Ernst read back in May; “DD Palmers’s hypothesis was that interfering with nerve function would affect optimal well-being, he explained his theory around “displaced vertbrae”. Palmer’s understanding of the effects of spinal manipulation should be viewed in its time (the late 19th century) when surgery had a mortality rate of 76%. I know of no 21st century chiropractor who would explain chiropractic as Palmer did, or a surgeon who would operate in his street clothes without a mask.

I have written many articles about this use of the word disease in relation to chiropractic and this is a classic example of people quoting Palmer selectively and out of context.

DD Palmer wrote one book “The chiropractic Adjuster” His son BJ wrote many and collectively they are called “Green Books. The book that most accurately describes the teachings of the Palmers was written by R.W. Stephenson’s in 1920 he compiled his list of “chiropractic principles” in his“Chiropractic Textbook”, BJ Palmer praised him for compiling the principles of “my writings into systematic organised manner so anyone could easily find “what chiropractic is, Is not; What it Does and does not; how and why it does what it does not” Lets see exactly what Palmer says about disease.

Modernist chiropractors and sceptics deliberately interpret the principles literally without reference to the time they were written in or the language of that time. The best example is the way they ignore the little weeny hyphen in Palmers dis-ease (Principle 30 “The Causes of Dis-ease”). Stephenson clearly states in the book “Disease” is a term “used by physicians for sickness. To them it is an entity and is worthy of a name hence diagnosis”.

Stephenson describes Dis-ease (with a hyphen) as “a chiropractic term meaning not having ease. It is a lack of entity It is a condition of matter when it does not have property of ease. Dis-ease is the condition of tissue cells when there is uncoordination”. Stephenson goes onto say, “if tissue cells are not coordinating some tissue cells will be made unsound, therefore they are sick and not at ease. By deconstructing chiropractic down to a vitalist level of cell communication we are going beyond nerve interference and into the realms of neuroscience that Candice Perth would describe as the “molecules of emotion” 80 years later. Anyone who would state “subluxation chiropractors” claim to cure all “disease” is either disingenuous or ignorant. I have no idea which one applies to Professor Ernst.

I would now add having read the explanation of dis-ease he must also be dishonest in  writing what he did in the latest pulse.  He is obviously prejudiced towards chiropractic rather than simply skeptical. Steffann reminded him of how little he knew about chiropractic in June on  Ernsts Pulse blog has Ernst got any new information has he found a chiropractor claiming to cure all diseases since then. Why let facts get in the way of a good story for his septic disciples.

I remember reading his first article in the Independent in 1998. Prof Ernst was concerned that much of what was being reported on the complementary medicine seemed to stem from an “extreme pro or an extreme contra” . Ernst told readers that he had decided to stay out of the “media battles and focus on discussions in scientific publications publication” however he could no longer remain silent and decided to make an exception to this rule”. Why? The reason he said was simple in his view “the debate has gradually become ill-informed, misleading and seriously unbalanced”.

If anyone has contributed to misleading the public about chiropractic it is Ernst with his wild claims regarding the dangers and ineffectiveness of chiropractic. Much of his information has been gleaned from American websites like chiro base which has inspired him to do some studies none of which have been repeated by an credible researchers as far as I can see.

Its one thing not to be good at what you do but to deliberately to provide untruthful information to make the point he wants to get across shows that he is no better than a tabloid hack. Professor Ernst is not blind he chose to put those stones on his eyes and he sees what he wants to see about chiropractic because it keeps him in the public eye, not his “research”  or his academic kudus he is just another celebrity rent a mouth. What is truly embarrassing is the difficulty the chiropractic profession has had in shutting him up. I would just love the opportunity to a public debate with this man because he clearly does not know what he is talking about. 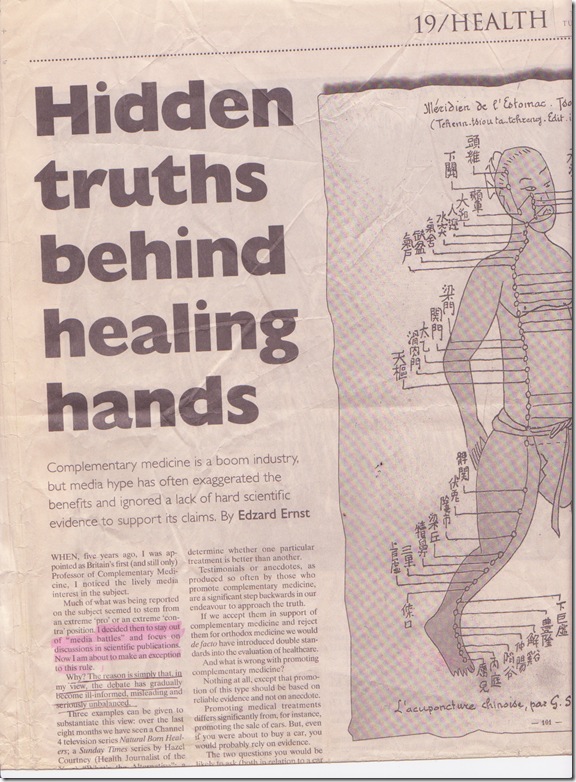