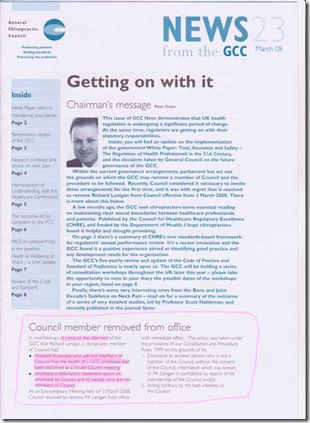 I made the front page of the latest GCC Newsletter, it’s a great example of how the “Shadows” spin council information and minutes for the profession’s consumption. Hopefully this will get people signing up to the conference. BCA president Tony Medcalfe has refused an invitation to speak about his vision of statutory self regulation, presumeably because it includes himself being "appointed" onto the next council.

For those of you who dont read the blog this is todays entry about the GCC Newsletter. I am may be repeating myself here but the blog is open to everyone to read.
In January Peter Dixon gave me seven days to make a second apology to Margaret Coats for offending her with the postings I made before becoming a council member (I refused) and thats the reason that sooner or later I was going to be removed from council……. Now Peter tells the profession that it was “with regret” that the GCC resolved to remove Richard Lanigan from Council.
That brought a few chuckles after they way I had been harassed by Peter during my time on council. He wanted me to apologise to Coats for what I had said about her before I became a council member.
Peter goes on to say in his Newsletter “In mid-February it came to the attention of the GCC that Richard Lanigan, a chiropractic member of Council, had revealed to people who are not members of Council that the health of a GCC employee had been discussed at a closed Council meeting”
I revealed this to one person not people, however this information is hardly a state secret when Peter is happy to reveal it to the entire profession. I have no knowledge of any health problems suffered by Margaret Cotat’s, nor have I discussed her health with anyone outside Council, however it would appear that is the impression Peter Dixon would like to give the profession. I now regret not offering a few diagnostic suggestions before I was removed.
On February 10, I e-mailed Tony Medcalf the President of the BCA asking his “ opinion on what is in the profession best interests” . It was me who made Peter Dixon “aware” that I was taking this action as I had come to the conclusion that I could no longer subscribe to the principle of collective responsibility of a council which seemed to have decided that statutory self-regulation is the end which justifies looking the other way, when the means being used to regulate are not in line with the Nolan principles.
What was being discussed at the closed meeting was the apparent risk to council because I refused to apologise to Margaret Coats a second time and therfore she might have grounds for constructive dismissal if I did not apologise again (this scared the lay people in particular), someone mentioned the stress poor Margaret was being put under and the members started to feel sorry for her. I have no sympathy for the woman, I was thinking of the stress she and Greg Price have caused may innocent chiropractors,
Peter also said in the Newsletter that I “circulated a defamatory statement about an employee to Council and to people who are not members of Council”
I believed that by exposing misleading information to council by the Chief Executive and Chairman of the GCC I acted in the best interest of the chiropractic profession and the GCC as the GCC remit is to balance protecting the public with the interests of the chiropractic profession. They were continued to cover up the activities of Greg Price and refusing to apologise for what has brought the GCC into disrepute. The comments I made about Margaret Coats were made to people of "qualified privilege" outside council because I have grave concerns about the effect this matter has had and will continue to have on the chiropractic profession.
Council members have all agreed that Margaret said at the meeting that "there was no evidence of Greg Price using a GCC server to make postings on US websites", this was simply not correct. "No evidence" is a small place to hide when, unknown to Margaret Coats I knew that in 2006 Dana Greene had given postings to Margaret Coats made on a website that Greg Price had admitted posting on.
Peter Dixon would not admit that Price was at work when these postings were being made. Having accused me of libelling Margaret Coats he stated “the detail around Mr Prices employment is not relevant to the resolution that I have put to council”, This is a great example of the cynicism I came to expect from Peter Dixon while a member of council and no longer wished to be part of their charade of "Protecting the Public", "Promoting the Profession", Setting Standards".
Some of the other comments I made about Margaret Coats in my e-mail to the presidents of the associations were, that in my opinion: “she has to go”, that she should not be involved insetting up the new regulatory process, that she might remain as registrar until she is 80.
I also told Council members that I would never again attend another GCC meeting if Margaret Coats was present, which may have forced their hand a bit.
Because of a lack of time, I have been slow at filling the details as they happened in the blog, and have only got to March 2007. In the comming weeks I will provide all the details of what I said and did before the conference in June.
Richard

← My favourite GCC waste of money “cat hairs on the clinic floor” cost to the GCC £36,000 cost to chiropractic?
How to Complain about the GCC and not upset Peter Dixon or Margaret Coats →