Some skeptics have a very highbrowed view of a “scientist” and “scientific research” and did not like the fact Neals Yard would call these ladies scientists. Edzard Ernst calls them FAME for Female, Middle Class, Educated (cant remember the A) and they use Complementary Medicine. Whoever  made this complaint will not be happy about this ASA Adjudication. 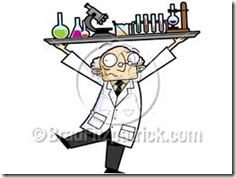 A catalogue ad, for health and beauty products, featured four women in white coats standing in a garden holding different products. Text stated "MEET OUR GREEN SCIENTISTS Susan Curtis NATURAL HEALTH DIRECTOR Our resident expert on all areas medicinal, and respected author, Susan has been part of the NYR family since 1983. Dr Dharmini Dhushyanthan HEAD OF FORMULATIONS With a doctorate in Natural Preservatives in Toiletries, Dharmini has pioneered many of our award-winning formulations. Dr Pauline Hili RESEARCH & DEVELOPMENT DIRECTOR Pauline has helped to transform the world of organic cosmetics and toiletries during her 20 years with NYR. Dragana Vilinac HEAD HERBALIST An expert in Western Herbal and Traditional Chinese Medicine, Dragana oversees our herbal medicinal formulations & tinctures …".

The complainant challenged whether the women in the ad were qualified enough to be considered scientists.

Neal’s Yard (Natural Remedies) Ltd (NYR) said the term "scientist" was legitimately used in numerous ways and applied to many and varied disciplines. They said the term used to be narrowly applied to somebody that framed and tested hypotheses, but it was now used more widely, stating that the British Science Association had encouraged a discussion of the term and acknowledged a more inclusive description of what a scientist was.

NYR said they developed and sold products that were often referred to as alternative or natural therapies, and had customers who understood and wanted to know more about such therapies. Because of that, they had a shared culture with their customers, and believed they were likely to understand the use of the term scientist in a wider context. They said they had also noted that science was beginning to be viewed more widely, such as the emergence of "green science", defined by Carnegie Mellon University as "the application of eco-friendly thinking to scientific disciplines" and "a holistic approach to sustainability science".

However they said that even if the narrowest definition of scientist was applied they were satisfied that the four women would be qualified and experienced enough to be considered scientists. They said the women were all well qualified with considerable expertise in their fields. They provided biographies for all four women, which showed that Dr Dhushyanthan and Dr Hili had PhDs in traditional scientific disciplines while Ms Curtis and Ms Vilinac had undertaken study in Homeopathy and Medical Herbalism respectively. NYR said those two women had qualified in their fields before degrees were possible, and now those courses were available as BSc degrees at UK universities. They said that as well as their academic study, the women were published authors with extensive knowledge and expertise in their fields, which had led to them being requested by international agencies to participate in activities that were unquestionably science based, and said that meant both could be correctly described as scientists.

The ASA noted that there was no qualification process to become a scientist in the same way there was for professions like medicine or law, and that there was no universal definition of what constituted a scientist. We also understood that science was continually evolving, and that "green" and holistic approaches to science were becoming more common. We considered that because the ad was in a catalogue for natural remedies, readers were likely to be familiar with alternative or less traditional approaches to science, and therefore to the idea of a "green scientist". We noted that the evidence showed that the four women in the ad were experts in their respective fields, and that they all had significant experience in "green" science. We therefore considered it was acceptable for the ad to refer to the women as scientists, and concluded the ad was not misleading.

We investigated the ad under CAP Code (Edition 12) rules 3.1 (Misleading advertising) and 3.7 (Substantiation) but did not find it in breach.

Adjudication of the ASA Council (Non-broadcast

← Does Journalist James Delingpole have a point when he describes “the curious double standards of Simon Singh”?
If you are going to treat symptoms this is the British Chiropractic Associations advice on complying with ASA code. If you correct vertebral subluxations its irrelevant. →