The story that a “Council illegally spied on family during row over catchment area” has been covered extensively in today’s press. I have been waiting for the result of this hearing before revealing details (see below for starters) of the GCCs covert activities and issuing complaints against the GCC to the Department of Health.

A family has won a landmark legal ruling that council officials acted illegally in spying on them to check they were living in the right school catchment area.

Jenny Paton, her partner Tim Joyce, and their three daughters, were placed under surveillance by Poole Borough Council for three weeks in 2008. Now the Investigatory Powers Tribunal – which deals with complaints against surveillance – has ruled the authority acted illegally.

The ruling could have massive implications for local authorities throughout the country following evidence that they have resorted to covert surveillance techniques on more than 8,500 occasions during the past two years. It was the first time tribunal surveillance powers granted to local authorities had been tested in an open hearing……………..Rest of article

This was what the BBC had to say on the matter.

In February 2 2008, I predicted GCC Chief Executive Margaret Coats and Chairman Peter Dixon would be gone by the end of the day. The mistake I made that time was listening to Christina Cunliffe and doing it her way. I will now predict that this time next year Margaret Coats and Peter Dixon will be gone from the GCC because I know better to rely on anybody else for help. 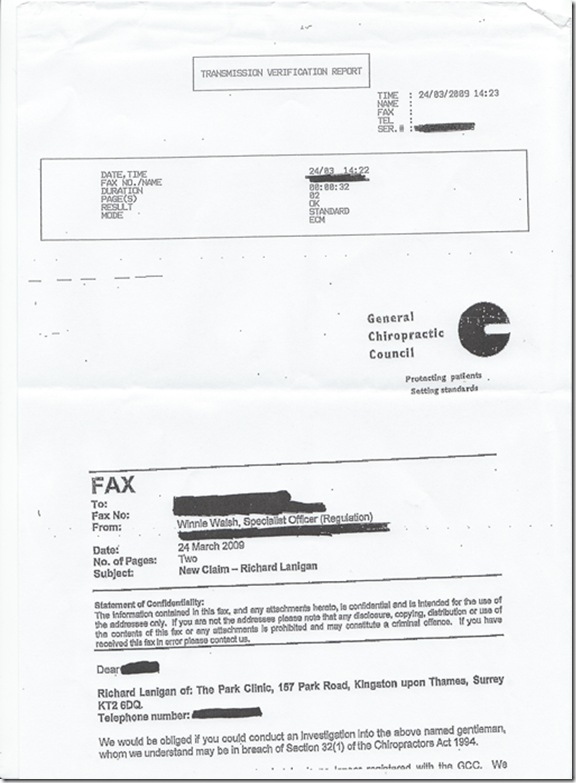 on the 24 of March 2009.   The GCC use Fax for all this type of correspondence no doubt to restrict the paper trail and reduce the likelihood of them getting caught. The Investigator was so blatant in his efforts to entrap my receptionist into saying I was a chiropractor, a patient became concerned for her and informed me. I went out and confronted the man who claimed his friend was a potential patient.

I immediately submitted a Freedom of information request  to the GCC  and got witness statements from the patients who were in the reception during his interrogation of my receptionist.

The GCC refused to release the Investigators report as they were obliged to as a public body under the Data Protection act and it took 18 months before the Information Comissioners Office ordered the GCC to comply and even then they had to be told a second time to relaease the rest of the documents.

I have waited for a judgment on Poole council before making it public and much of it I am holding back to see if there is a possibility of suing the GCC. Below is the summary of the Investigators report the GCC have redacted it to protect their investigators identity. 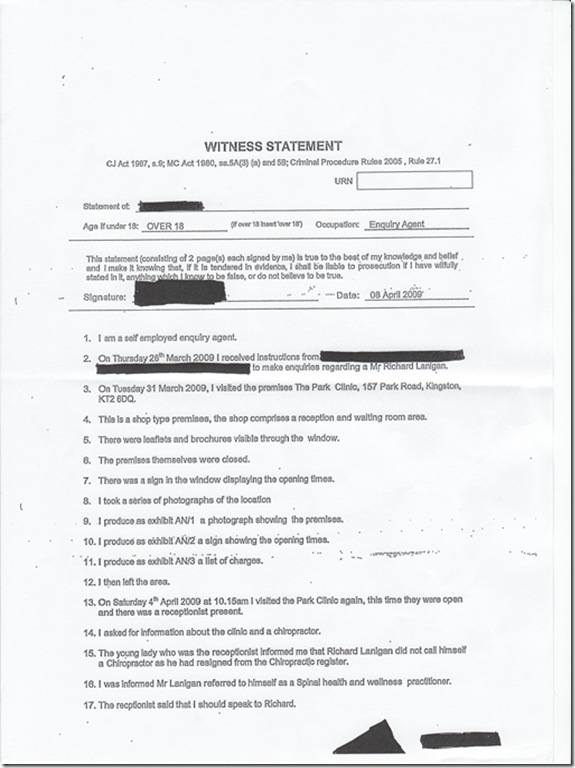 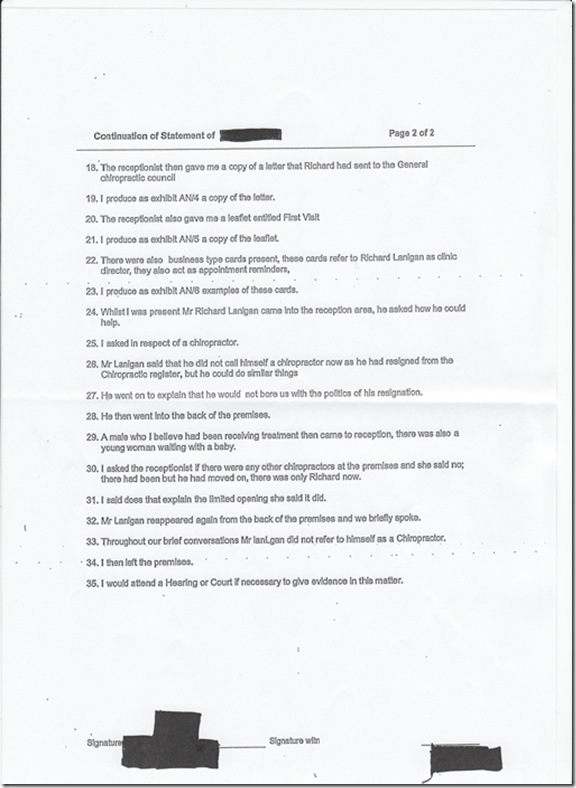 According to the Council for Health Care and Regulatory Excellence the GCC is the only health regulator that uses private investigators, which they have instructed 19 times. They have taped peoples telephone calls without informing them which a public body is obliged to do. The GCC informed me that they were authorised to instruct private investigators to conduct surveillance by the Regulation of Investigatory Powers Act (RIPA), however when I contact the tribunal who regulates the use of the Investigatory Powers Act, they said the GCC was not acting under their authority and so unlike the parents in the case above, I could not take the same action against the GCC for ordering surveillance on a private citizen even though they had no evidence that I had done anything wrong, on the contrary the GCC had a copy of the consent form I get patients to sign stating they are aware of the reasons I have resigned from the register and that I no longer call myself a chiropractor.

My MP Dominic Raab, has written to Margaret Coats for an explanation of their harassment of me. Over the weekend I shall be submitting my complaint of the GCC regarding  their  improper use of the Regulation of Investigatory Powers Act (RIPA), to the GCC chairman Peter Dixon. Of course this is rather ridiculous to have Dixon investigating the improper actions of his own council, thats the way the GCC has always done things and how it has managed to cover up a multitude of its sins.

No doubt I shall mention this anomaly in my letter to the Department of Health, Privy Council and any one else who is interested. If you are a member of a chiropractic association I would ask you to contact them and ask them if they think this is acceptable for your regulator to act in this illegal manner and what do they intend to do about it.

Remember the GCC could instruct investigators to spy on you without having a reason,  Coantct your MP  and inform them that the GCC is not fit for purpose. Make sure you tell them that you are not bothering to complain to the GCC because unlike the Osteopathic council the GCC does not have an independent complaints panel for dealing with complaints about GCC council, they like to keep it in house and expel those who would rock the boat and to think I had to apologise to Margaret Coats for calling her a liar.

← Why is the osteopathic profession growing at a much faster rate than the chiropractic profession in the UK? Are they just nicer people?
Latest from the British Chiropractic Association’s president Richard Brown (The guy who thought it was a good idea to sue Simon Singh). No icebergs sail on, full speed ahead. →

19 comments for “It would appear the GCC acted illegally when they instructed private investigators to spy on me.”