How Much is the Body Politic Going to Cost us all?
By Richard Lanigan DC 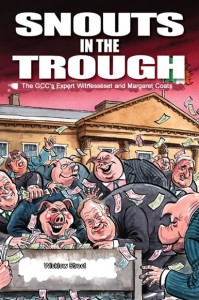 These should be great times for the chiropractic profession, but we continue to waste energy and resources fighting among ourselves. The fact the BCA was unable to endorse the international consensus view of chiropractic, “The ACC Paradigm”, just about says it all. The new BCA statement is not that far removed from the paradigm, it just avoids use of words like “subluxation” and “self healing”. Why can’t we respect colleagues’ choice of terminology provided it is ethical and they are  able to articulate it in the context of contemporary health care.

DISCIPLINARY HEARINGS – A CASH COW FOR LAWYERS AND EXPERTS
Over the last two years I have been involved and taken an interest in the first three disciplinary cases brought by the GCC against three BCA Chiropractors. I was an expert witness in the Jensen case  where he was found guilty of being misleading and untruthful on his website by copying information taken from Koren Publication leaflets. I have not been at liberty to comment on the case before now, because it was necessary to commence legal action against Kennedys, the solicitors who represented Dr Jensen in the hearing, to recover my fees of £27,634.

Defence costs were over £75,000, but the insurance only covered £50,000 costs; someone was going to lose out and I had no intention of it being me. One can only guess at GCC costs, but they must have been considerable. In all, a tidy sum of chiropractors money, which could have gone on marketing chiropractic, or even subsidising registration fees for new graduates. Many will raise eyebrows at the amount of money I received. However, I had to research and write two 20,000 word reports and attend five days of hearings.

Questions should be asked, however, as to why it was necessary to write two reports, and where was the public benefit to pursue a case against  Dr Jensen which began in 2000 with Margaret Coats presenting 65 pages of charges written by her BCA expert David Byfield. This was changed to 21 specific statements from the website on the morning of the hearings on the recommendations of the GCC’s Lawyer so bad was Byfields report and full of errors.

This is how the GCC move the goalposts, three of these statements were completely new charges for the defence to deal with. Eventually Dr Jensen was found guilty of being misleading and untruthful in 12 of the 21 statements. In my opinion, four of the statements were simply badly presented text no more. Four others were taken from a book “The Hysterectomy Hoax” available from the BMJ bookshop. The last four statements the PCC judged to be misleading were taken from books on vaccinations. The result? Twelve sentences left from the original 65 pages of charges, and an admonishment which was considered sufficient punishment. This cost well over £100,000, it does not make sense.

In September 2001 I was asked by Dr Jensen’s defence team to look at an “independent report”
prepared for the GCC as the charges against Dr Jensen. The report was written by Dr David Byfield
and presented two points of view. Dr Byfield’s view that chiropractors should restrict themselves to
musculoskelatel conditions, where chiropractic treatment is supported by scientific evidence, and Dr
Jensen’s apparent “subluxation practice” view as stated in the website. Surprisingly, Dr Byfield’s
report contained many quotes from the website that were materially inaccurate in 35 sections. This led Dr Jensen’s barrister, Mr Evans, to state in his summing up at the hearing “It is he (Dr Byfield) who has been inaccurate here in his enthusiasm to argue the musculoskeletal case and express his contempt, of the philosophical approach” (GCC transcript day 5. page 22), he went on to add (page 23) that Dr Byfields view was based on “dogma, and not on reason”.

For example, Dr Jensen did not state The Vertebral Subluxation Complex (VSC) theory is “the view
held by the entire profession” as claimed by Dr Byfield’s in his report. Another example was leaving
out a word which changed the meaning. Dr Byfield stated for Dr Jensen to say the “birth process is a
traumatic, crippling event, is ludicrous at best”. The website actually stated “The birth process is
potentially a traumatic, crippling event”, In another section, Dr Jensen pointed out how parents could be hurting their child’s spine and nervous system, by “mild to moderate shaking of a child”, “playfully throwing the child up in the air and catching him/her”, “ spanking a child” this was described as rough behaviour that could cause Vertebral subluxations, so Dr Jensen recommended that children should have a spinal check. Dr Byfield presented this in his report as being wrong for Dr Jensen to suggest that “abused children or children subjected to potentially violent behaviour need a spinal check up by a chiropractor rather than being referred to the appropriate authorities”.

Another example was “chiropractors completely cure bedwetting by spinal manipulation”. The
actual statement in the website was “In many of these cases, the bedwetting problem was alleviated if not completely cured following chiropractic spinal adjustments”. A further example was “VSC is the only cause of sciatica” whereas the Website stated VSC is one of the most common causes of sciatica. In addition, there were many criticisms of Dr Jensen by Dr Byfield which contradicted views expressed by Dr Byfield and others in his book Chiropractic Manipulative Skills. It concerns me that the GCC’s expert who is now on the General Chiropractic Council, on their education committee, and interview panel, a senior academic who professes to subscribe to the evidence based protocol, and who chiropractors expect to be impartial, wandered far from the reality of the website and presented his text as fact in a report that could have disastrous consequences for a colleague. Dr Jensen was eventually found guilty. Whatever one’s opinion of the statements on Dr Jensen’s website and how they were presented they were not “untruthful” (read my initial report https://www.chiropracticlive.com/?m=200205. Are there any absolute truths in health care? I gathered all my evidence from peer reviewed journals (over 100 appendices) supporting the statements in the website.

But why was the case ever brought in the first place when Dr Jensen had taken the material off his
website? Why is the BCA not interested in finding out why their own member was subjected to this
harsh treatment for over 18 months? Will anybody explain why this hearing was necessary and if
anybody except lawyers and myself benefited? How does this “protect the public”? In fact I argued
websites like this provide a public service questioning the biomedical approach to health care.
It was not as if the GCC was unaware that prosecuting this case was not in the profession’s interest.
BCA chiropractor Richard Rumary resigned from the GCC in April 2000, because of the investigating committee’s decision to pursue these cases saying it was tantamount to “penalising dentists for telling people that eating sweets was bad for their teeth”. According to Richard Rumary, the view of chiropractic on the GCC would appear to be out of line with the views held by the large majority of chiropractors in the UK. Richard Rumary stated in a letter to the GCC concerning his resignation, that the Council is “dominated by members (and staff) who have a very rigid and essentially orthodox-medical view of the way in which chiropractors should be educated, trained and allowed to practice. These members are either professional members with their own particular educational or political agenda, or lay members who either know nothing about the real nature of chiropractic or seem to have a built in bias against it”.
Was it the “political agenda” and “bias” Richard Rummary refers to that influenced the original
decision to proceed against Dr Jensen? Have the GCC elections had any effect on the “bias” in these
committees and where the influence lays? Sadly, it would appear that some chiropractors have an
appetite for testifying against colleagues who use the term subluxation. Published comments by
members of the BCA executive in recent years only serves to reinforce this view. If chiropractors
continue to disparage each other in this manner, it only serves to created a cash cow for lawyers and their experts, this will ultimately cause irreparable damage to the chiropractic profession in the UK.

I hope the four associations are prepared to put pressure on the Privy Council to investigate this
possible lack of impartiality in the GCC. Registered chiropractors will not be happy at the prospect of
huge increases in insurance premiums in future years due to conflict over semantics.

SUBLUXATION A DIAGNOSIS THAT CAN BE UNDERSTOOD BY OTHERS

I myself like the words “ subluxation”  and I am not offended by someone who would rather describe a joint fixation. Does the misunderstanding arise because subluxation is assumed to be the same as a fixation and therefore not suitable as a diagnosis under the GCC code of practice and therefore would not be understood by other health care practitioners reading our notes? To deal with this requirement I have a printed an explanation of a chiropractic “subluxation” on all my notes.
“The diagnosis of the Vertebral Subluxation Complex, is a theoretical model of segmental motion dysfunction that incorporates the complex interactions of pathologic changes in nerve, muscle, ligament, vascular and connective tissues, that affects the bodies adaptability to physical, chemical and emotional stresses and in doing so compromises general well being”.

Those who thinks a strain/sprain grade 4, with fixation, is a more scientific diagnosis and more
appropriate to chiropractic care are deluding themselves, there is no evidence to support this view,
only prejudice.

← GCC and BCA member David Byfield does not like people having free speech.
Margaret Coats could care less about the chiropractic profession →