In March 2006 chiropractors were shocked by the negative headlines in many newspapers promoting an article by Professor Ernst in the Journal of The Royal Society of Medicine. The GCC responded in a press release stating that it was “extremely concerned” about the accuracy of the RSM’s media release and about the paper itself. My concern is that the GCC knew well in advance what was in the paper yet did nothing to prepare the profession for the media onslaught . 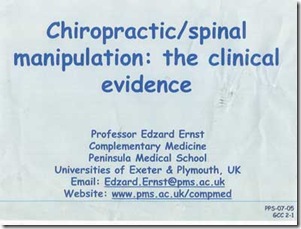 The GCC invited Professor Ernst to make a presentation to the GCC on August 4th 2005 about his well documented views on chiropractic. There followed a 38 slide power point presentation of the material he was about to publish in the RSM journal. After the presentation The GCC submitted the following questions for Ernst to respond to at the end of his presentation: “Are you familiar with the work of Herzog et al regarding the physical characteristics of cervical spine manipulation and its effect on the vertebral artery”? “How do you rationalise your view of the chiropractic profession as responsible for most serious adverse affects when osteopaths, some physiotherapists and other professionals also engage on a global basis in manipulation of the cervical spine”? “Why do you say that osteopaths use mobilisation, which is inherently safer and chiropractors only manipulate, which carries more risk”? “Where is your evidence of "serious adverse events, such as stroke (sometimes fatal) are regularly reported"?

I wrote to the GCC asking for Ernst’s reply to these questions as they were not in the meeting’s minutes as I wanted to send them to all the local GPs. Gregory Price informed me that copies of Ernst’s presentation are the only record of the meeting held by the GCC and they did not note his answers to the questions. “Minutes of the meetings are not verbatim transcripts. No other records are held in relation to these matters". Price et al had plenty of time to post disparaging messages about chiropractors on the internet but no time to note what Ernst had to say??? Had the GCC demonstrated an ability to defend the profession when Ernst presented, he may have not been so cavalier in the way he presents his evidence 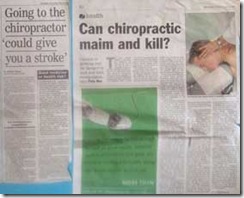 As it was, chiropractors in practice had patients bringing in newspapers with sensational headlines suggesting chiropractic is “worthless” and dangerous. At the same time “Big Pharma” is telling the public that they have no alternative but to accept the risks from Vioxx in the management of chronic pain. An open goal if ever there was one which the GCC missed by a mile. It probably does not help having a medical pharmacist as chair of the PCC on your team. Professor Ernst’s responses to the questions would have helped chiropractors deal with the controversy when it happened in March 2006.

If only the GCC could have used some of the £300,000 it wasted on persecuting innocent chiropractors to promote the efficacy and safety of chiropractic. Unfortunately they have neither the funds nor the inclination to launch such a campaign Thought I would give everybody a reminder of this topic if they are attending any GCC hustings. Attached Image This is the first slide of thirty eight which Edzard Ernst presented to GCC council in July 2005 before he published the findings. GCC members sat like startled rabbits caught in the glare from Ernst headlights. So startled were the rabbits that they were unable to minute the meeting or inform the profession what was coming our way in the form of sensational headlines in the national press. Having being savaged by the rabbits myself, I doubt if Ernst had many sleepless nights after submitting his article. Most chiropractors I speak to tell me they noticed a drop in new patients since thes articles were published last year. I wonder why?? We can at least take comfort from the GCC defense " even a walk in the park has risk

← Some things are not measured by science
I get spinal joints moving again, I dont treat conditions, I do cross my fingers →