I have often wondered what motivates the CAM sceptics, I suspect the majority are intolerant angry people looking for a cause. In the event that I am wrong and sceptics are idealists who do care about improving peoples health let me explain what makes people healthy so

sceptics could use their undoubted talent on the internet to draw public attention to health and the work Cuban health care workers perform in the third world to achieve this.  Its wealth, not CAM practitioners or scientific evidence that  impacts peoples health the most. 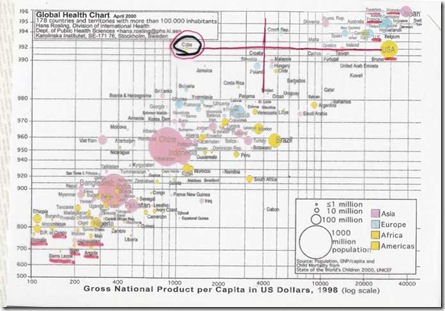 Wealthy countries  are healthy poor countries are not, socialist Cuba is the exception to this rule. As our attention is drawn to Haiti by politicians seeking a photo opportunity we should bear in mind the health of these people has largely been ignored by “western” governments focused on maintaining friendly corrupt democracies, rather than empowering people to take care of themselves. Give a man a fish, feed him for a day, teach a man to fish feed him for life. However there is the risk of another Cuba on the US’s doorstep which wealthy countries do not want.

When the TV cameras leave Haiti so will the political commitment, as it did in 2005 after the Pakistan earthquake. Cuban doctors have unique experience of working in earthquake zones in third world countries without infrastructure.

There are Cuban medics currently working on the frozen slopes of the Himalayas in Pakistan following their unmatched medical support provided during the 2005 Pakistan earthquake.  Many hiked for days over mudslides to reach the isolated communities of the region to deliver medical care.The Cubans who went there realised these people needed health care and their commitment to these people is evident to this day. Currently there are 35,000 Cuban currently providing healthcare in 78 countries around the world, more than the World Health Organisation and Medecins sans Frontiers put together.

In Haiti there were 344 Cuban medics working in Haiti before the earthquake, they work out of two improvised hospitals where today they are providing services to the earthquake victims.  Cuban doctors are working in all  regions of Haiti.  They are assisted by approximately 400 Haitian medical interns who have completed medical degrees on full scholarships in Cuba. There are also 150 medical students from the US inner cities on scholarships, provided they return to do pro bono work for the poor back home, the US state department calls this exporting terrorism and they have Cuba on their list with Iran and North Korea et al .

Cuba has provided free public health care to the poor of Haiti since 1989 – the only public medicine available in that country.  During the  coup and subsequent US/French/Canadian invasion which deposed the Aristide presidency, Cuban doctors continued to provide medical care when other hospitals closed down and other doctors fled the country. So while the media is describing the difficulty of getting aid in they are largely ignoring the heroic efforts of the Cubans doctors some who I have worked with in a Cuban Policlinic. Cubans have many WOO practitioners working in their health care system.

This article was in yesterdays Huffington post. Haiti and Cuba signed a medical cooperation agreement in 1998. Present in Haiti before the earthquake struck were 344 members of the Cuban medical brigade who have been providing primary care, obstetrical services, and operations to restore the sight of Haitians with various eye diseases. Earlier this week, Cuba sent 30 more physicians along with food, medicine, plasma, and other items.

According to Spanish press reports, this contingent is already providing emergency medical care across Haiti for patients that Cuban doctors had already been treating for many years. Immediately following the earthquake, these doctors opened up two make-shift clinics in their residences because local hospitals were destroyed. Cuban doctors then moved to reopen the "Social Security" hospital and started operating on the injured. A day ago, the Cubans reopened the national hospital and started to treat people.

Their work could form the foundation for broad Cuban-U.S. cooperation.

First, as U.S. AID and military teams roll into Haiti, the U.S. government should make it clear that our personnel should cooperate, coordinate, and work with the Cuban medical personnel in Haiti. They know Haiti, they’ve been providing health care in Haiti since 1998, and they have been running a highly effective medical response since the earthquake occurred.

Second, the U.S. can help expand the reach and impact of the Cuban medical brigades. When they experience supply shortages, we should offer the Cubans medicines and other necessary assistance to help with their effort. Gary Maybarduk, a veteran of relief efforts with experience in Haiti, has urged lending the Cuban brigades durable medical equipment and using U.S. helicopters to transport them to inaccessible locations.

Third, we’ve seen reports that injured Americans – and possibly, injured Haitians – are being airlifted to the medical facilities at Guantanamo Bay, Cuba. Our colleague at the New America Foundation, Col. Larry Wilkerson, has proposed that we open up Guantanamo to Cuban doctors.

Cuban doctors should be welcomed on to the base to assist in treatment and operations. Our armed forces – which have lengthy experience in cooperating with the Cuban military – could allow Cubans to come pick up (or they could transport) victims to Cuban hospitals for treatment. Our militaries carry out exercises to practice for fires and other big accidents near the base that require joint efforts to treat the victims – this would be effective and it would assure quicker attention for the wounded.

Fourth, global leaders are calling for a summit to coordinate global responses to the Haiti tragedy. That summit could take place in Cuba, which is ideally located. If it doesn’t happen there, Cuba should be invited and encouraged to play a leadership role in the coordination of response efforts.

President Obama knows the Cubans can do more than open up airspace to American flights. When he attended the Summit of the Americas in Trinidad and Tobago last year, he made a public statement about the respect shown Cuban doctors by the heads of state he met at the Summit, and conceded that the U.S. had to engage in efforts like medical cooperation to reconnect our country to the people of the region.

The previous administration couldn’t bring itself to do this. After Hurricane Katrina, Cuba’s government offered to send 1,586 doctors and 25 tons of medical supplies to buttress what was obviously an insufficient response to the suffering of American citizens on our own Gulf Coast. Bush being Bush, his administration not only declined the offer but insulted the qualifications of Cuban doctors.

We need to be Samaritans and not silent or sarcastic about what Cuba has to offer. We have seen the better angels of Obama’s nature, and we’re hopeful that he would seriously consider cooperating with the Cuban government especially if it meant saving Haitian lives.

This tragedy is about Haiti, not Cuba or President Obama, and I recognize that. But we can help Haitians by enlisting with the Cubans in a joint effort to speed and magnify aid our efforts. Doing so would set a new example for U.S. diplomacy that will return long-standing benefits to our nation and our relationships across the Western Hemisphere. And possibly even set a new tone for the U.S.-Cuba relationship. We need it.

← Is General Chiropractic Council Chief Executive Margaret Coats a bigger bully than Gordon Brown?
A chiropractic adjustment performed skilfully works whether you believe in it or not. →