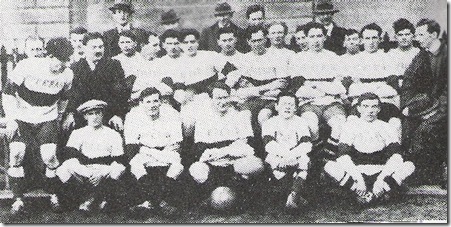 At about two in the afternoon, on November 21, 1920, the players of Tipperary lined up for a team photograph before the match against Dublin. At the rear three good friends from the village of Grangemokler stand side by side, In the centre my grandfather Richard (Dick) Lanigan, to his left Gerry Shelly and  to his right Mick Hogan. In minutes Hogan would be dead, shot by British paramilitaries, along with 13 other people, the youngest a fourteen year old boy.

Before the match only two of the players were members of the IRA, after the game the all joined. Within 2 years Ireland was independent and this team had won the all – Ireland football championship. Some  say they became champions because you did not mess with these guys they were warriors and they had courage, rather than skill.

My grandfather would not have wanted an apology from the Queen yesterday at Croke Park, it would have been better if politicians showed they  learned from their “mistakes” as the queen put it. No doubt 100 years from now another British Monarch will be visiting sites in Iraq, Afganistan and Libya where thousands of innocents civilians  have also died as a result of foolish foreign policy.

When I was diagnosed with cancer I decided to remove all stress from my life and I would put the GCC behind me, what I now realise it was not the GCC or skeptics that were causing me stress, it was my frustration that so few chiropractic colleagues possessed the courage to stand up for themselves and were happy to be beaten into submission for 20% VAT. I come from a family of warriors, you did not mess with my mother, father https://www.chiropracticlive.com/my-mammy-phyllis-mcghee-was-right-about-most-things/  or sisters. This was never just about Coats or Dixon it was about the team I found myself on, I was not able to make them better and I could not  accept they level of mediocrity that has been set by the GCC.

When you dont know if you have a future, you take time to reflect and realise whats important. I am so lucky to have had the upbringing and the family I have had. I have had two sleepless night since I found out I had cancer. One was the day I saw the tumour on the colonoscopy. The other was when Arsenal lost to Bolton. My young children have shown the courage I would expect of a Lanigan and I have no doubt they will do me proud in the future. I am in my third week of chemo and radiation and have not had one side effect and the prognosis is good and I am putting together another blog about my experience which I am sure will help others.

The doctors warned me of all the side effects I might have, and I said I would not have any! How was I going to do this? they asked. I was going to change my diet, go to bed early, have lots of sex and get adjusted every week. Now my chiropractor is living in fear of the GCC finding out. He/she has not x rayed me, or referred me back to my GP, in fact there is no record of me attending the practice. Find the subluxation and correct it, thats all I ask.

No doubt the skeptics would say I am “deluded”. I pity them if they ever become seriously ill and are going to restrict themselves to treatments supported by RCTs. How can people to be so stupid to think medicine has all the answers. They have some and have been fantastic with me however there is a lot more to this than removing a tumour from my body.  If I ever needed convincing of how “deluded” the skeptics are it was at a Cancer workshop put on by the College of Medicine yesterday and I will be attending their inaugural conference today; http://www.collegeofmedicine.org.uk/  Skeptics are entitled to their opinions, I have been reading some of their stuff of Twitter during my break.  It was amusing to think it made no difference whether I engaged with them or not their message is the same; No RCTs so it cant work! They are unable to see how ridiculous that position is in relation to clinical science. I have been critical of chiropractors inability to articulate clearly what they do and failure to take these people on, however the reality is it wont make any difference to these guys so dont bother, concentrate on you clients

If I ever needed convincing cancer has thought me how much our philosophy has to offer people who are unwell and how foolish it is to restrict the practice to musculoskeletal conditions.

← Osteopaths tell “skeptics” their complaints are vexatious. GCC send 700 to the PCC. CHRE conclude both regulatory bodies are doing an excellent job.
The tutors at the Welsh Institute of Chiropractic were ripping off their students →

11 comments for “The flowers smell beautiful and its great to be alive.”